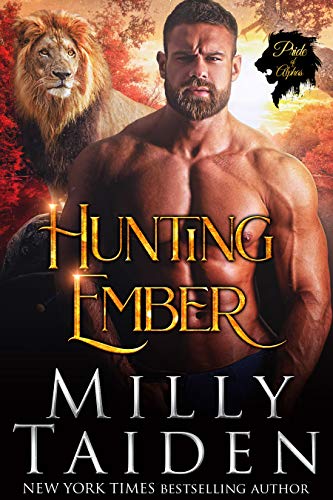 Hunting Ember begins the Pride of Alphas series with a charming, steamy couple and hidden dangers sure to draw you into this series from the very start.

All Ember wants is her own bakery with one qualification, she wants to get that bakery on her own without one bit of help from her parents or sisters… at all.  She’s a talented pastry chef, she practically runs her boss’s bakery on her goods alone yet she wants her own bakery.  And she’s found a way to get that dream off the ground.  All she has to do is win one simple baking competition.  Right.  If only it were really that easy she’d be picking out a storefront next week.

No, Ember is facing a danger lurking in the shadows, someone doesn’t want her competing let alone possibly winning that reality show competition and they’re making threats she should be paying attention to.  Yet she’s not about to let someone steal her dream and she continues as the threatening letters start adding up.  It won’t be long before someone has to step in to save her.  Who knew that getting herself in danger like this would lead to meeting the perfect man for her… her mate.

I absolutely adored Kai.  He’s a strong leader, a take-charge kind of guy who is in his element with danger, figuring out the enemy, and taking them down.  He’s a pushover where his nephew and niece are concerned, and he’s just waiting to find his mate to complete his happiness and maybe have a few cubs of his own to spoil and love.  He’s not desperate by any means, but he is waiting a bit impatiently these days as he watches his brother’s family grow and longs for that connection to someone meant just for him.  Kai is about to have his wish granted… and he certainly wasn’t expecting this stubborn human to turn his world upside down.  But first, he has to save the girl, make sure she gets her bakery and put a stop to the threats against Ember.  That might be easier if his mate would remember that going off on her own without his protection puts her in danger – she might be his but she is one stubborn woman.

Hunting Ember has everything I love about Shifter Romance.  A hot hero, a strong heroine, a vile villain, lots of sizzling chemistry, and two people who really do belong together.  With a cast of secondary characters who will one day have their own stories told, this start to the Pride of Alphas series grabbed my attention and never let go.  I’m hooked and waiting for Chasing Sparx up next.