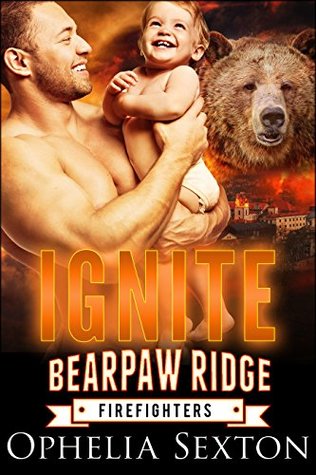 Bear shifter Evan Swanson loves curvy women…but not commitment. When he rescues a woman and her infant niece from a hotel fire, he’s shocked to realize she’s his fated mate. Not only is she his bear’s wet dream, she’s the first woman who’s ever turned him down for a date.

Steffi Tristan has been caring for baby Olivia since her sister and brother-in-law disappeared. When her niece turns into a bear cub before her eyes, Steffi knows it’s time to get help. Evan’s the most attractive man she’s ever met, but Steffi’s spent a lifetime in her beautiful sister’s shadow. A man like him couldn’t really want her.

When a sinister organization bent on abducting little Olivia follows Steffi to Bearpaw Ridge, Evan vows to protect them both. But can he neutralize the danger, persuade Steffi that he’s serious, and settle down happily with just one woman?

Steffi has had some major shocks recently.  Her sister and brother-in-law are missing after their plane has gone down in the wilderness, their daughter who she’s babysitting while they were gone on a trip has suddenly turned into a bear cub in the middle of lunch and now some crazy woman tried to snatch Olivia from her stroller in the park.  What the heck is going on?  She needs to get Olivia out of town and find help and the only logical answer lies with Patrick’s family in Bearpaw Ridge – but even there the shocks to the system just keep coming.  And in the middle of all this chaos is a hot and sexy fireman who has a real commitment phobia that she’d love to cure him of – if she were brave enough to take that chance.

Evan was quite content with his life.  He loves the ladies, had no intention of settling down with just one any time soon and in spite of his family’s meddling he’s planning on sticking to his life as he knows it.  Right up until Steffi and Olivia crashed into his life.  This intense need to be around her, protect her for ever couldn’t be what he feared it was, right?  Getting this human to trust him was going to take some time, but time is something he believes he has plenty of, right up until trouble comes knocking on the door and life could change for everyone.

Ignite is fast paced, intriguing and full of danger as well as those sexy moments for Steffi and Evan.  In many ways Steffi is on stress overload, and Evan is in denial of what he feels for her.  Getting this couple straightened out is going to take some work.  There is an edge to this story, and it’s not all from outside sources – which makes it more interesting.  Couples from the previous stories in this series are here as well, and we get another look at their lives now as mates.  I enjoyed Evan and Steffi’s story and if you’ve followed this series I believe you will too.  I do believe that this is a series that is best read in order.  Since this is a large family what happens in one story is referred to in talk or with people in the next, so in order might work best… in my opinion.

If you love Shifter Romance or Paranormal Romance then this is a story and a series that I would recommend.  Likable couples, danger and interesting happenings, secondary characters who will get their own story and keep you on your toes.