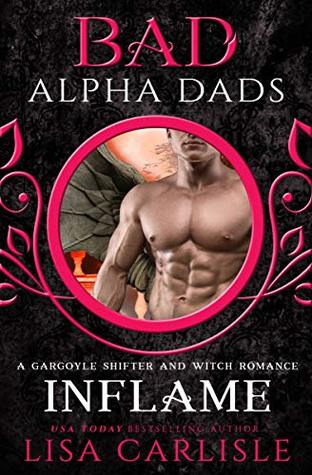 Lucan and his brothers have guarded Vamps, a bar/nightclub for the goth and the others that also live among us, for more than a decade.  Gargoyles set in stone form forever by the curse of one evil, power hungry, demented witch.  Gargoyles are the protectors of the earth, so when danger approaches they can briefly break out of their stone form, shift and protect their friends and the clients of Vamps when absolutely necessary.  Their freedom is only one short day long before they return to stone and watching.  Yet, this night is different.  This night they have shifted back into human form with no danger present.  It seems the curse is lifted and that means the witch is dead.  Too bad, for Lucan has spent years fantasizing about the many painful ways he would end that woman’s life.

Just when the formerly cursed gargoyles are beginning to believe in and enjoy their new found freedom… reality strikes again in the form of one petite, beautiful woman with a message that Lucan was completely unprepared to hear.  He is the father of a 13 year old daughter, and the woman who cursed him and his brothers is her mother.  The lovely woman delivering this astounding news is his daughter’s aunt… and the most attractive woman he’s met in his life.  The pull toward Elise is strong, but his confusion and disbelief are stronger.  Perhaps not the best first impression, but when blindsided Lucan acted first and thought later.  He has a daughter, and is only beginning to understand just how much life has changed with those simple words.

The sparks were flying off of Elise and Lucan from their first meeting and never calmed down.  It’s certainly easy to understand the many emotions going through Lucan.  Add some teen anger and mistrust, some danger from a nasty vampire and you have the  makings of an intriguing, action packed Paranormal / Shifter Romance.  I enjoyed stepping into the Underground Encounters world.  While I am a huge believer in starting from the beginning, it was very easy to fall into this world.  BAD Alpha Dads stories are often like that, part of a series yet separate in scope for that story.  We do run into characters from the series, but their parts are very much centered around Lucan, Elise and a new found member of their family, so there was no feeling of leaving important parts behind.

If you love a good Paranormal Romance, if Shifters are your weakness then you’ll feel right at home with Inflame.  Sexy moments, relationship development, family bonding and some bad guys to deal with.  The perfect storm of a story for me.  I admire Lisa Carlisle’s ability to slip something small but important right past us… you’ll see eventually.  That takes skills, and I found myself stopping, thinking and nodding at the time.  Good job.