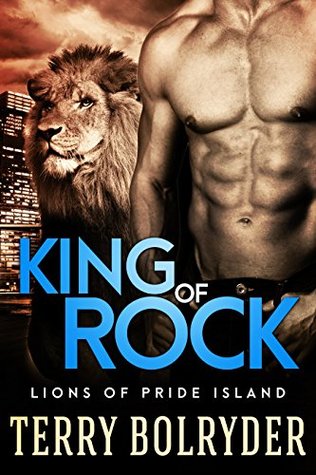 The start of a new series by Terry Bolryder is always cause to celebrate.  Since the story blurb gives you a very good idea of what this story has to offer, I’m going to dive right in to my reactions to Beau and Stacy’s romance.

An Oracle does the picking of mates for the royal lion shifter family in power on Pride Island – and the mate she has picked out for Beau is no stranger to him.  Of course, he hasn’t seen her since that night of the windless summer when they were kids and she was in trouble.  But it made sense, he had already protected her and surely she would remember his heroic act and fall right into his arms.  Yeah, right.

Stacy has no desire whatsoever to meet up with the rock star Beau Hunt.  She knew him or at least his family from another part of her life… he was a royal prince of her people, lion shifters – and his family was responsible for the deaths of her parents.  Yet, it was impossible to overlook his dare of spending a week with him so he could convince her that he was a good guy and excellent mate for the million dollars that would go to her favorite charity no matter what her decision.  She could put up with an egotistical rock star for seven days, and then go on her merry way no emotions involved, her heart still secure, her rage at the royals intact.

I liked Beau a lot.  He’s a charming man, secure in himself, doesn’t take this rock star stuff too seriously as he simply loves the music and knows that his being out in the public benefits his family and their island nation.  He remembers his mate, granted they were both younger then but he’s content with the Oracle’s choice for him.  He doesn’t understand Stacy’s animosity towards him, the rage just below the surface.  That she is attracted to him and is fighting that is very obvious but there are things he cannot tell her until she is part of the royal family – and there are things she refuses to tell him that might give him some clue as to how to win her heart.

Stacy – I had (and still have) such a difficult time liking her.  Her preconceived notions, her refusal to listen to what Beau is trying to explain to her, her downright refusal to trust him, yet expecting trust to come naturally on his side of things.  She became to me that barely tolerated spouse of a good friend – if you want the friend in your  life, you put up with who they chose to love.  So for Beau’s sake, I was happy that he got the happy ever after that he deserved.  Granted not everyone is going to feel that way about the girl, I simply could not like her enough to care one way or the other.

On a side note here, it was really fun to see Hercules and Hera make a cameo appearance in King of Rock -Herc is half-brother to Beau, Axel (Ace) and Cain.  Hercules and Hera’s story is Bear-ly Human (Bear Claw Security #4) – I love it when characters cross series, it’s always a treat to see them again for me.

Love Shifter Romance?  Then Terry Bolryder is an author you should be reading.  This is a story that I would recommend and I’m looking forward to Ace’s and Cain’s stories to come.