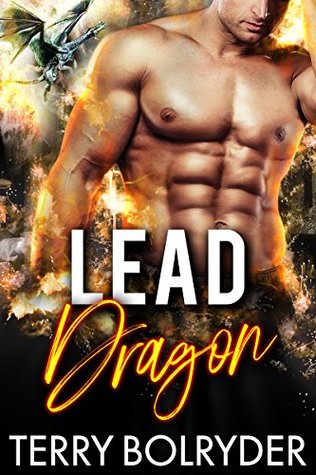 Lead, captain of an elite team of powerful dragons, is about to embark on the most difficult mission he’s ever undertaken: trying not to fall in love with the cute, curvy woman he saved and is now tasked with protecting. But how is he supposed to do that when everything inside the honor-obsessed dragon roars “mate” whenever he sees her?

Brittany is just a regular human. She never expected to be kidnapped by wolves or for six ridiculously hot dragon shifters to rescue her. But there’s one dragon, with bright golden eyes, dark hair and the composure of a warrior that she can’t seem to stop thinking about. Especially while she’s living in a mansion with him and his sexy friends.

As the sexual tension between them rises like dragon flame, Lead and Brittany will have to navigate the blurred lines of duty and integrity in a world that is only getting more confusing with each passing day. And with a sinister new evil on the horizon, Lead may need to reconsider what honor really means if he wants to protect his mate.

Titles in the Dragon Guard of Drakkaris include:  Lead Dragon – Cadmium Dragon –

I will be frank and admit that I was hesitant on the alien dragon aspect of this next series.  Shifters, yes… but I’m not a reader of alien romances, I don’t know that I ever will be and that’s okay, we all like different things.  Yet I’ve found that the dragons of Drakkaris are so very similar to other dragons of Ms Bolryder that I’ve enjoyed over time that I had little to worry about.  In fact, many of the things these dragons do not know about our planet are quite amusing, and I’m certain will continue to be so.

When Lead and the other guard dragons came through the portal with Marina and Mercury their purpose was two-fold.  Most importantly was to aid in the coming war between good and bad  shifters on Earth.  Secondly was to have the chance to find a mate among the human women they might encounter.  Back home the female dragon population is so scarce that honor challenges decide, in part, who will win a lady’s favor.  With the natural poisons running through their bodies, eventually without a mate each dragon will die of his own poison… so finding a mate, or at least the chance to was a huge part of each dragon’s decision to leave their home world.

The first mission the oracle sends them on is to rescue a special woman kidnapped by the evil wolves.  Simple, straight forward and natural for these dragons – except there were a few surprises among them that Brittany would pick one dragon to be her protector from the first meeting… and that dragon would in fact be her mate.  What follows is a crash course in all things human, including understanding human women, and watching Lead make mistake after mistake with Brittany through his concept of honor.  Misunderstandings galore will be an every day occurrence.  Brittany has chosen her dragon but she’s not understanding why he isn’t making her his choice as well.  Their troubles come from not understanding how a person from another planet views certain words and actions.  It takes a huge misunderstanding, and a near tragedy before Lead and Brittany finally understand that each does in fact pick the other for life.

I enjoyed Lead Dragon very much, and Lead and his mate, Brittany were perfect to start us off.  A story full of danger and laughter, learning and loving, and plenty of sexy times as well.  I liked them as a couple, and I loved getting to know the other dragons a bit better as well.

After finishing Lead Dragon a few thoughts come to mind – and I’ll have to be vague because I hate spoilers.  Things to watch for in this series for me will be Marina’s increasing role and keeping an eye out for an undercover-ish wolf named Fifi.  I am a reader who looks for future possibilities in every story I read – and I see a lot in this first story of the Dragon Guard of Drakkaris series.  Now to sit back, enjoy, and watch it all unfold.  I’d definitely recommend Lead Dragon and this series.  Because of the threads woven throughout these connecting series I feel pretty strongly that you need to at least have read the Awakened Sea Dragons series to fall into this one.  There are glimpses of what is unfolding  now in the previous series.  So if you cannot go back to the beginning, try to go back one connecting series.