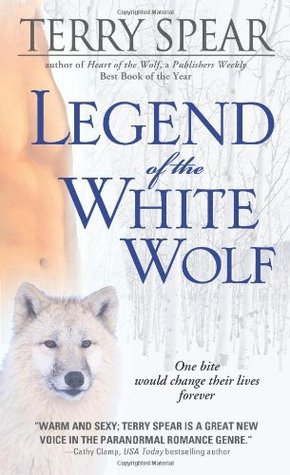 Terry Spear’s Heart of the Wolf series has evolved into such a large grouping of sub-series that I’ve made the choice to go back and re-read the earlier stories in order to get caught up on characters and events in the newer releases that are connected in some way.  Legend of the White Wolf is a perfect example.  This 2010 release introduced us to four men, friends and business partners who would eventually make up a newly formed, newly turned wolf pack.  Four ordinary men who through events beyond their control will be, at times, brutally introduced to the world of shifters – and their lives will never be the same again.  Legend of the White Wolf is Cameron’s story.  Recently we had a Christmas themed story, Dreaming of a White Wolf Christmas which is Owen’s story.  The upcoming Flight of the White Wolf is Gavin’s story.  And I’m certain that David’s story will appear soon as well.  So, yes, it’s time to go back to the beginning with Cameron and Faith’s introduction to each other – and the world of wolf shifters.

Faith was on a mission to track down the no good, lying thief who used her romantically to get close enough to her father’s research to steal not only a flash drive’s worth of research but the entire hard drive as well.  He will pay, and she’s tracked him down to this small town bump on the map, now she just has to get out into the wilderness and steal it all back.  Right.  No problems there.

It had to have been fated, or the gossipy desk clerk’s ineptitude that brought Faith and Cameron face to face.  No matter how they met, the attraction was strong from the start.  Yet both were on their own missions so not too much came of their meetings except curiosity and wishful thinking – for now.  It won’t take long before they’ll discover that they both are after the same type of information.  Cameron is searching for two of his business partners who have disappeared while on a bear hunt.  All roads lead to the same trail guide business who happens to use arctic wolves as sled dogs.  Hmmm.

As a combination of Romantic Suspense, Shifter Romance, Paranormal and just a plain good story, Legend of the White Wolf delivers an intense story, characters to either love or loathe, and a group of secondary characters you’ll want to know more about.  The balance of sexy sizzling times with an in depth story line works so well.  I was just as captivated with this re-read as the first time I picked up this story years ago.  I know I’m addicted to an author’s worlds when I’ll willingly spend the time to re-read their earlier stories… and Terry Spear is always an author that I enjoy.  If you enjoy Paranormal, Shifter or Romantic Suspense then you’d enjoy this story and the series.  I’d definitely recommend it, and I’ve no doubt that I’ll end up re-reading it again.