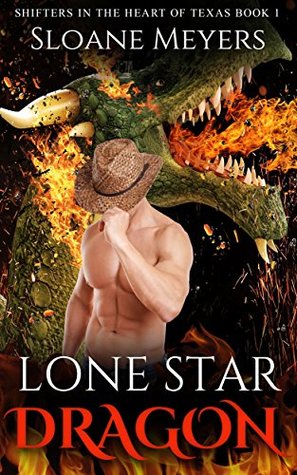 Dragon shifter Theo Wilson is a hometown hero in Persimmon Springs, Texas. He’s leading the high school football team on a quest for their first ever state championship, and it looks like they’re going to make it all the way this year. But despite his outward confidence, he’s lonely on the inside. He can’t show his true dragon self to anyone, for fear that his secret would tear this small town apart. When an outsider from the east coast shows up and steals his heart, however, he has to decide whether he can learn to trust her enough to finally reveal the truth…

Maddie Anderson has always been an East Coast city girl. So she’s devastated when she’s forced to take a job as a reporter in a small town in the Southwest. She’s even more frustrated when her first assignment—to interview the local high school football coach, Theo Wilson—quickly goes south. Theo refuses to speak to her, but Maddie doesn’t give up easily. She never would have imagined that her quest to write a news article about him would turn into a whirlwind romance, and she starts to think that maybe love is enough to keep her in Persimmon Springs. But before she can sort through her feelings, Theo reveals that there’s much more to him than meets the eye, and Maddie has a choice to make…

Is young love strong enough to keep Maddie in a small town that holds such big secrets? Read this steamy dragon shifter romance to find out!

Time to start a brand new series with Sloane Meyers, this time mostly about dragons, but there’s a good friend tiger shifter in the mix as well.  In the small Texas town of Persimmon Springs there be dragon shifters and football.  I’m guessing you’ll know which one is better known to the residents.  Right now Theo Wilson, Head Coach of the local high school’s football team, Warriors, has just brought the team to their first semi-final win in years… way, way too many years.  In the middle of the post game celebrations, Theo catches sight of a beautiful woman on the field, a total stranger who is looking excited but lost.  It’s not long before she catches his eye, and with a smile of recognition heads straight for him.  Unfortunately, Maddie is about to find out just how deep grudges and feuds go in Texas.  On finding out that she’s the new reporter for the town jerk’s newspaper, Theo has little trouble cooling down his interest and blowing off the reporter’s request for quotes.  No way, not gonna happen.  As he leaves her standing on the field looking upset and frustrated, Theo is wishing she worked for anyone but his arch enemy, Steve.  Too bad, there might have been a spark going on there.

Maddie was desperate for this job in this tiny Texas town so far from her beloved big cities, especially New York.  Savings gone, no other jobs available she was stuck with a job at a paper she’s quickly realizing no one likes, respects or wants anything to do with thanks to the filthy rich owner and total slimy jerk of a boss.  He’s got a grudge against Theo and even when she writes a great story, Steve steps in and rewrites the entire thing making it a total farce of what she’d done… and all lies – under her byline.  Now everyone thinks she spewed forth that untrue, mean-hearted drivel.   Especially Theo, if the looks that could kill and the angry stride toward her were any indication.

So, Maddie and Theo did not get off to the best of starts, but that will change rather quickly once the truth is known.  Lone Star Dragon is a sexy, fun and interesting world building story.  There is actually little dragon in it, although Theo’s dragon is mentioned often.  When his dragon is revealed, he is one magnificent creature for sure.  There is a bit of family mystery going on, the mention of the reality of evil vs good dragons, the reveal of one nasty man with a grudge and small town gossips.  Lots of secondary characters to enjoy, some will have their own tales told one day and the others we’ll get to know better throughout the series.  I took this first story in the new series as an introduction and setting up the world with one strong, solid couple in the lead.  Theo and Maddie are rather uncomplicated, a romance built more around the man instead of the shifter.  And a woman who isn’t afraid to believe in the… unexpected.  I enjoyed their story very much and I’m looking to make some new friends in Persimmon Springs, Texas.