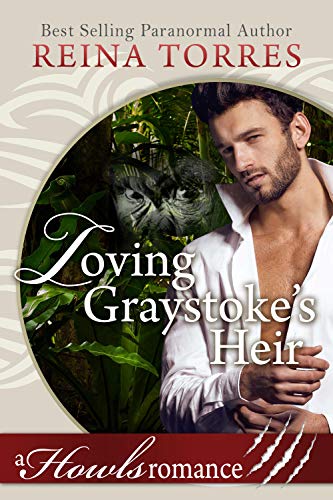 I fell in love with ‘Loving Graystoke’s Heir‘ very quickly for several reasons.  Most importantly of all, it’s a damned good story.  I’ve always been fascinated by the myth/legend this reminds me of (or is actually based on, that I do not know),  While I’ve read gorilla shifter stories, I’ll admit that there aren’t a great many of them to be found.  And I confess that I have always loved looking into gorilla’s eyes – not up close and personal though but through photos and documentaries.  These gentle giants have such humanity within their eyes, the tales they could tell they seem to speak with those eyes.  So in many ways, aside from this story coming from one of my favorite authors, I was ready to be swept away by this story… and I certainly was.

Donal, being a male (sorry guys but we all know that you guys will sacrifice unnecessarily without giving the women who love you a good reason) decided that to keep his love safe from whatever was happening to him that he should leave her… for her own good.  *sigh*  He traveled to Africa to continue the work he loved with keeping the animals safe from poaching, which runs rampant in spite of all the best efforts.  He believed he was dying until he discovered that he certainly was not, but was in fact granted another life, an additional life… but he feared this other life could harm Tamsin so he remained away allowing her and his company to believe that he was most likely dead. (all I can say with a shake of my head is: “Men!”

Tamsin was determined to find Donal and equally intent on keeping his uncle from declaring Donal dead so that he could take over the company.  So she made one last, almost desperate effort to find the man she loved by going to Africa to search herself.  Her discoveries only intensify her belief that the uncle is up to no good at all.  Finding Donal will be a bittersweet reunion if she cannot convince him that they belong together or that his uncle has plans that do not include rescue, discovery, or acknowledging that Donal is very much still alive.

Have I mentioned that I loved ‘Loving Graystoke’s Heir’?  Tamsin and Donal work so well together as a couple, the action is fast-paced and intense, the villains vile, and the chemistry between these two mates is sizzling.  I really hope that this story is simply the beginning of an unnamed series… I so want to go back to this world, it would be amazing.  If you love a really good love story, if anything Paranormal or Shifter Romance related is your cup of tea – then pick this one up, right now.  I’m betting you’ll be quickly hooked as well.