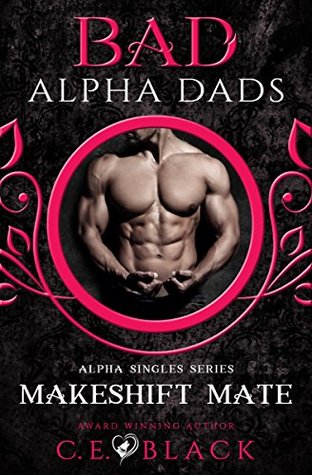 For years now the Wild River Pack have been enabling their Alpha.  He worked hard as the youngest Alpha to lead a pack, his entire life was devoted to his pack – but at a cost, his relationship with his daughter Sara.  While Locke ran the pack, his pack pretty much raised Sara.  Now he’s got a pre-teen daughter who he doesn’t understand, forgets more than half the time and is totally confused when his pack members refuse to be responsible for his daughter any longer.  They’ve enabled him for far too long now and it stops immediately leaving Locke to scramble for a solution.  A comment by a young pack member grabs his attention.  He needs a mate.  Yes!   Someone to take care of Sara is his only thought – this dad needs an attitude adjustment fast and he’s about to meet that very capable woman.

Makeshift Mate brings us a very determined couple.  Locke is blind to his shortcomings, he doesn’t see anything wrong with devoting all of his time to his pack and very little to his daughter – after all, she’s part of his pack, right?  Isa is strong willed, successful and determined to make her company a success.  She cares for Locke and Sara yet he has to change or they will never work out.  Her influence is slowly changing the dynamics between father and daughter, now Locke has to be willing to change to keep his mate at his side.  And neither of them are really certain he can ever do that.

I enjoyed this story very much, even when I was shaking my head at Locke’s cluelessness.  Speaking of clueless, Locke’s solution for a training bra will leave you speechless, and in tears of laughter at this dad without a clue.  Passionate, funny and the type of romance that will grab your heart tight.  I’d recommend Makeshift Mate to any Paranormal Romance or Shifter Romance reader who enjoys a solid story, compelling main characters and watching an Alpha learn a few life lessons.