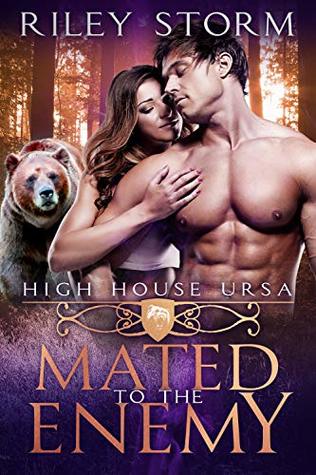 MATED TO THE ENEMY brings us the third story in the High House Ursa series by Riley Storm.  Jessica and Klaue make a believable (under the circumstances) couple who are fighting her fears and their attraction, even as Klaue has been told that she is his mate.

Although I’ve been away from this series for a bit I was easily drawn back into this world with no difficulties.   This story is so intense mainly because I “get” Jessica’s reasons for remaining silent and Klaue’s need for her to open up and trust him, just a little.  The Cover Description gives you what you really need to know before picking up this story.  The emotional pull is another thing though.  There were moments when I wanted to rattle Jess’s bars on the cage she kept important information in.  And there were times when I completely understood Klaue’s frustration at just about everything.  The action is fast-paced, the situations believable (for the genre), and the people we meet, both good and bad,  play their parts perfectly.  A few twists and an epic ending make this another great story in the High House Ursa series – and another reason to get caught up on the series since there are now two more series attached to the High House(s) that I need to dive into.

I had a blast with MATED TO THE ENEMY and I’ve already got the next story downloaded ready to read.  If you love an intense, sexy, sizzling Shifter Romance with likable, believable characters then you’ll enjoy this one – and want more.