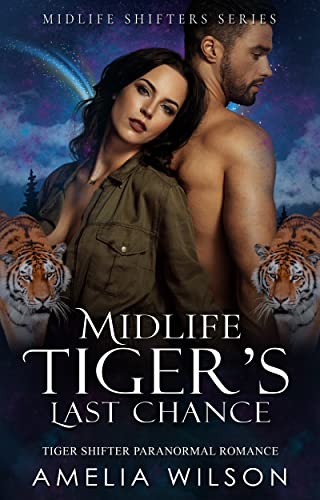 He’s a tiger shifter ready to move on from his past. She’s a beautiful woman overwhelmed by the future.

*MINNIE*
Sometimes it feels to her like life is nothing but one challenge after another.
Sometimes just holding on feels impossible.
She does everything she can to give her kids a chance at life.
But she doesn’t have a life.
She’s just existing and she doesn’t think really living is even an option for her.
And then, like a roaring tiger, Brock shows up and everything changes.
This man is like something out of a dream.
He’s handsome, strong, kind, dark, and perfect.
She can’t resist him but she also can’t escape from the pain she sees behind his eyes.

It’s no surprise the two of them seek comfort with each other but can something real come from an almost desperate attempt for any connection at all?

Midlife Tiger’s Last Chance might not be a long story, page count-wise, but it definitely packs a powerful emotional punch within those pages.  I haven’t yet read the earlier books, but I will definitely be going back to get caught up on this world soon… and will continue the series from this point onwards.

Minnie is a single parent of two little ones, she’s a take charge, no-nonsense insurance claims representative who will not be talked down to or over, she’s pretty much devoted her life to her kids and while that worked for a while she’s starting to wish for a bit more in her life.  When Brock, the owner of the agency who has been out of the country for some time returns from Europe he is immediately impressed by Minnie’s work ethic… and the instant sting of attraction was a complete surprise, one he’d take his time acting on.  Mutual attraction, passionate encounters… and a secret that could change everything for this new couple.

I liked this couple, they sent sparks flying from their first meeting.  The story is solid, engaging and easily drew me into this world (even when this is my first story within this series).  I loved the secondary characters, they really filled out this romance plus maybe gave some hints for the future of this series – time will tell.  In all, Midlife Tiger’s Last Chance was a fun, sexy, engaging story with likable, even relatable characters that kept me on my toes throughout the story.

If you love a good, solid Shifter Romance with sizzling chemistry, and some secrets to be revealed then Midlife Tiger’s Last Chance would be a perfect fit for you.