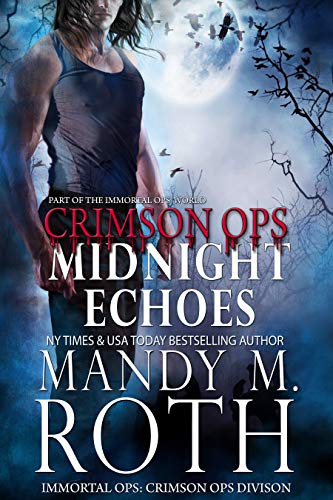 **Midnight Echoes previously appeared in the Taming the Vampire anthology

We’ve had glimpses of Bhaltair in earlier books within series in the Immortal Ops World of connecting series.  One of the reasons I’m so glad that I did follow the author’s recommended reading order is that I’m getting a good idea of who is coming up soon to find their mate and hopefully their happy ending.  While Midnight Echoes is a short novella-length story, it does give us a better understanding of this mysterious, powerful vampire (a member of the “Fang Gang” which several operatives across the different ops groups affectionately/jokingly call the Crimson Ops division).

Bhaltair is older than most, could be a master vampire in his own right yet stays as the right-hand man of the most powerful vampire around out of loyalty, and because he is drawn to watch over, protect, and guard Meena who is a human born to supernatural parents.  Meena’s twin, Rose, did get powers/abilities and isn’t afraid to show off in front of Meena often.  In truth, I didn’t like Rose… at all.  She’s spoiled, jealous, an attention-seeking brat who constantly demeans and puts down her twin.  And like all secondary characters that we’ve met, it’s very possible that one day Rose will have her own story told – hopefully finding her mate will improve her attitude.

Bhaltair is convinced that he will remain mateless, yet his draw to Meena is growing stronger especially since she’s reached adulthood.  Although Meena has always been seen as frail and unable to defend herself without supernatural abilities, Bhaltair has been extremely gentle with her – except maybe that time he accidentally broke bones during a training session, it was then that he became pretty much hands-off in super protection mode.  Right now, Meena is ready to move on with a secret admirer tired of being seen as helpless and weak.  What Meena doesn’t know could lead to danger beyond what she could imagine… for there are others watching, waiting for the right moment to strike, and that moment has arrived.

There were times when I so wanted to shake Bhaltair or give him a stern talking to at the least… to get over himself and simply believe what is right in front of his stubborn eyes.  It took a near-tragedy but he’s finally verbally claiming Meena, now if only he’d get on with the rest of their lives together instead of holding back in protection mode.

Midnight Echoes is an intriguing introduction to the Crimson Ops series – I feel like I already know many of these vampires from the appearances they’ve made in other stories, I’ll be proven wrong in that when their individual stories come out I’m sure for they all have mysteries we haven’t had even a glimpse of… yet.

Although it’s a short story it packs a powerful punch.  I enjoyed Midnight Echoes and now need more vampires in my life.