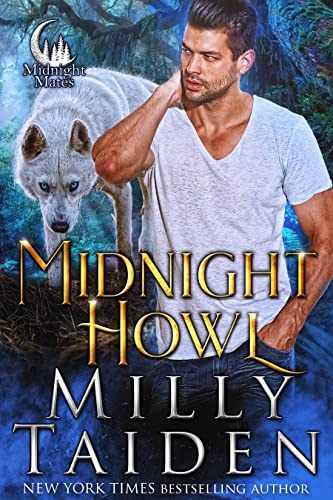 Cassie Burch, high school vice-principal and recently single lady has met the man of her dreams. Unfortunately, her heart isn’t ready for another relationship after finally dumping her worthless ex. When she agrees to a casual link, she has no idea what she’s getting herself into. Romance is about to hit her harder than she ever expected.

Alpha wolf shifter, Talon Ruiz, is restless and can’t figure out why. He just opened a high-end shifter nightclub, and the newness has already worn off. When his mate stumbles into him, he’s more than ready to keep her forever. And he’ll do whatever he needs to prove to her he’s worth her love.

The problem is Cassie doesn’t want a serious bond. And everything he does to try to romance her fails. He was kind of a jerk, but he’s changed. If he doesn’t figure out what he’s doing wrong, Cassie will leave him in the dust. And by pack law, if the alpha doesn’t mate, he must fight to the death to keep his status.

His heart and his life lay in Cassie’s hands. Can she love a man who turns into a wolf?

Midnight Howl begins the Midnight Mates series with a slight twist on the fated mate romance.  This time, Talon is going to have to work, really hard to get his mate to accept him because Cassie’s not interested in anything more than a sexual relationship.  She’s had enough of heartache, but she won’t pass by a handsome man who is really into her.  Just don’t ask her for forever, she’s done that and still wears the scars when it failed.

As the Alpha of his pack, Talon must take a mate or have to constantly fight for the Alpha spot from all contenders, and there are so many wanna-be-alphas around.  He’s a playboy at heart who never really believed in the mate thing until he ran into his, thanks to his sister sending Cassie and her friends to his club one night.  Now that he’s touched her Talon finally understands what all the fuss is about… except she doesn’t know he’s a shifter let alone the Alpha, and she’s not falling into his arms (or his plans) at all.

Oh, Talon.  I loved this stubborn Alpha while at the same time I wanted to smack him upside the head so many times.  Talk about clueless!  So many misunderstandings could have been resolved with a simple conversation… but then we wouldn’t have this push-and-pull romantic story to enjoy, would we?  Cassie is strong and stubborn, I liked her so much for she is far from the usual shifter’s mate, even though she’s fully human.  It’s going to take something unique for Cassie to believe Talon about his wolf, and even more to realize that he’s the man for her in spite of her hesitation.  I enjoyed them so much, and they completely deserved each other by the story’s end.  I had fun, and that’s the entire point of reading romance.

Available for the Kindle (because it’s in KU)