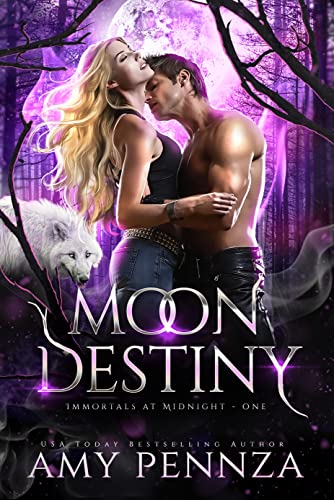 Brooke
When I agreed to accompany my boyfriend on a camping trip, I was hoping to salvage our failing relationship—not end up on the ground with my throat torn out. As I closed my eyes, I was certain it was for good.

But the next time I opened them, I came face to face with my boyfriend’s mysterious father, who told me Alex hadn’t survived. But I had, and now I was a werewolf.

Now I’m stuck in his house and under his thumb, forced to obey my new “alpha’s” commands. He’s grieving his son, and he’s determined to find the rogues responsible for the attack. But I’m grieving, too…and chafing at the loss of my old life.

I’m also having a hard time ignoring the attraction that flares whenever the alpha looks at me. If I have any chance of reclaiming my freedom, I’ve got to do it before my traitorous body leads me down a path far more dangerous than the new world I’m living in.

Hugh
They say only the most stubborn humans can survive a werewolf’s bite. Based on what I know of my newest pack member, the sayings are accurate. Brooke turned, which means she’s now my responsibility—and mine to tame.

But I don’t have time for blonds with big blue eyes and sinful curves. I’m determined to find the rogues who killed my son. If I don’t, my whole pack could be in danger.

There’s just one problem. Fate doesn’t care about my plans. Brooke is my one true mate. So it doesn’t matter if she wants to run. My wolf will always urge me to catch her.

Unless, of course, I reject her. And that’s exactly what I intend to do. I’ll train her, keep her safe, and send her on her way. The sooner she’s out of my life, the better.

Getting her out of my head is a whole other story…

Titles in the Immortals at Midnight include — Moon Destiny —♦—

Moon Destiny begins the Immortals at Midnight series with an electrifying tale that had my full undivided attention from start to finish.  This is the first book by this author that I’ve read, and thankfully, she has a backlist I can dive into while waiting for the next story in this particular series.

Werewolves exist, and even though she might scoff at that notion, Brooke is about to find out in the most dangerous fashion possible that her soon-to-be ex-boyfriend, and especially his dominant father are indeed werewolves – and there are rogue packs who are out to destroy the hierarchy of this world.  In the woods, alone with only Alex, Brooke will begin to feel uneasy and within moments will be fighting for her life when she and Alex are attacked by rogue wolves.  Brooke was moments from death and was only saved when Hugh (Alex’s father and Alpha of the Pacific Pack) turned her into the creature that killed Alex and tried to kill her.  Now her life is as turned upside down as it’s possible to be especially when the man who saved her is also her fated mate… awkward.

I love a sassy heroine, and Brooke has sass to spare.  She’s stubborn, determined to have her way, and not even the intense sexual attraction to Hugh is going to stop her from leaving this place and picking up her life again.  Yeah, sure, she almost died, he’s the Alpha, he’s the boss, and… she’s his mate.  Brooke is going to fight the attraction, and Hugh is going to try… both will fail in that endeavor.  Spectacularly fail in fact.

Betrayal and another attack will cement the bond growing between Hugh and Brooke… and those responsible will face one very angry Alpha.

Moon Destiny is full of twists, intense sizzling chemistry between Hugh and Brooke, danger, betrayal, and possibilities for the future of this pack, although not always in the way the characters believed would come to pass.  I loved the lead-in for Dylan’s story for he so deserves his mate and his promised future so I’ll be keeping an eye out for his story.  I had such a good time in this world, can admit to already being hooked on this series.  If you love an intense shifter romance with characters who leap off the page, steamy moments, and complications then you’d love this opening story for the Immortals at Midnight series.