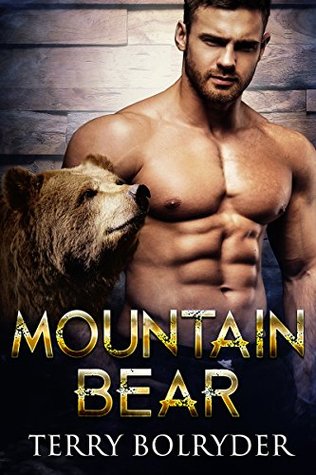 Bear shifter Shane McAllister never thought he’d use an online dating site, but right now he’s desperate. He has just months to find a mate before he and his brothers lose the family ranch. When one of his brothers makes some ‘creative’ changes to his profile, tricking a city girl into a dangerous situation, it’s up to Shane to come to the rescue. When he does, he’s shocked to come face to face with a curvy sweetheart who just happens to be his fated mate.

Ruby doesn’t know what she’s doing, flying out to to a remote town in Montana meet a man she’s only seen on a dating profile. But something about Shane’s gorgeous green eyes makes makes her want to take chances. Until her journey leads her to a remote bar, surrounded by rough men. Things seem bleak, until Shane himself comes striding into the bar, throws her over his shoulder, and carries her out.  Perhaps mountain men do things different after all…

Against all odds, the two of them click instantly, and Shane is every bit as good of a lover as he is a sexy rancher. But Shane has more than one secret that he needs to tell his new found love before they can be together, and there are more than just bears roaming in the mountains above Bear Haven.

Some wild country lovin’ with these shifters and their mates – 18+ readers.

Read on for my thoughts on Mountain Bear.

I’m not really sure how I feel about Mountain Bear – and I’m being honest here.  It really is a bit too over the top, even for my love of all things Shifter.

Shane, Jesse and Maverick are brothers who run the family ranch.  Trouble comes calling when they belatedly realize that according to their father’s will the ranch, Bear Haven, only stays under their control if the brothers take mates.  There is a dead line, and time is running out fast.  It’s decided that Shane will take the first spin at finding a mate – only his brother Maverick didn’t think too much of his online profile so he “jazzed it up a bit” in order to attract the right kind of woman… without telling Shane.  Maverick is the kind of bear shifter who believes that kidnapping equates romance *sigh* (hope his story is one that kicks him right in the man bits – hard).

Ruby has recently dumped her loser boyfriend, the one who by constantly needing a ride kept her late for work, enough that she’s been demoted.  So while out with her friends, a tipsy Ruby looks over an online dating service and comes across Shane’s profile.  She calls him and drunkenly asks if he’s a serial killer – it’s something a girl should know before she heads to the wilds of Montana.  Shane is amused by the call but doesn’t put too much faith in meeting this interesting lady.  Little does he know what his brother’s gotten up to!

Ruby and her friends Bonnie and Harmony head out for this tiny town to let Ruby meet her “mountain man”.  And that’s where things get interesting.

So, Mountain Bear.  I didn’t hate it, I also didn’t love it – so that leaves me somewhere in between.  Hell, I love an Alpha as much as the next reader – but the setting or I should say lack of setting and very little background or world building in the first story kinda slowed my interest.  I’m used to insta-love, insta-lust in Shifter Romances… but I dunno.

Shane is possessive, obsessive even – yet Ruby gives back as good as he deals out.  Some of the characters act a bit crass, and I think it’s that cringe worthy reaction that is making this not an easy read for me, personally.  I’m hoping that since we now have a back story in Shane and Ruby’s romance that the rest of the series will be a bit smoother, more focused on the mates and not the actions that don’t scream Alpha to me – but something else.

As with any review, it’s my own opinion – your’s may be quite different.  I’ve got the second story downloaded and read to read.. so let’s see where Bear Haven takes us.