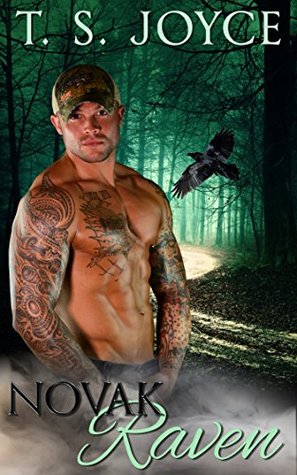 There are those extra special times when a reader simply connects with a book, a series or a group of series that all connect and create this alternative universe that is simply amazing… and so real.  I believe we all have those characters that we simply “get” and look upon as virtual friends, the ones that we could see ourselves hanging out with, taking part in their lives.  For me, that universe contains all of the series that make up the over-arching connecting series of Damon’s Mountains and Harper’s Mountains  And for once, I’m left speechless and clueless as to how to write a review without giving away major spoilers in my “need to talk about this” frame of mind.  So this will be a shorter review.  Not because I didn’t love Wes and Avery’s story – but because I enjoyed it so much, felt deeply about the outcome and actually cried at the near perfect ending.. I will be tempted to tell you too much, and you really need to read Novak Raven for yourself.  You really do.

If you have not followed any of the other stories in this connecting series, then the Cover Description will really give you enough of a glimpse into Weston and Avery’s story.  Betrayal.  Revenge.  Hopelessness.  Fear.  Utter sadness.  Those are just a few of the emotions that will be evoked as you read Novak Raven.  The madness and absolute terror of the Raven Shifters toward anything outside of their own kind is one driving force in this story.  Two young people who were allowed to be pen pals as children will set up an ultimate betrayal that only one is aware of, but that knowledge breaks off the communication that they both depended on.

Avery has finally been allowed to leave Raven’s Hollow far behind, and she never intends to return.  She’s safe here in Harper’s Mountains.  Oh, the Bloodrunner Dragon has no idea that Avery exists, but simply being near the Alpha and her crew has almost guaranteed Avery’s freedom.  She is terrified of meeting any of the shifters face to face for she’s been told tales of them all her life.  Yet, she once called one of that crew friend and maybe in her mind, more.  Weston had no idea how many times he’s saved her sanity over the years since they last wrote – but she would not, could not seek him out now.  She’d be fine.. she just needed a job.

Weston’s visions were destroying him slowly, piece by piece.  What good was knowing the future when you cannot change the devastating things about to happen to people?  But it’s not only his visions that hang heavy on Wes’ mind.  His friends are all settling in, making a new home and finding their mates here in Harper’s Mountains.  He knows he will never find that comfort, for the one person who held his heart once betrayed him in the worst possible way – but she was it for him and he knew he would not find what his friends had.  When Avery shows up for a job interview, it’s questionable who was more surprised or stunned.  Intending to quickly send her on her way, Weston found himself over-ruled by his best friend and business partner, Ryder.  And so the past meets the present – who knows what the future holds now.

Novak Raven is an emotional roller coaster to read.  It will touch you on some level.  Love will almost always overcome evil.  But evil can do a lot of damage in the meantime.  Read this one, you won’t be disappointed.