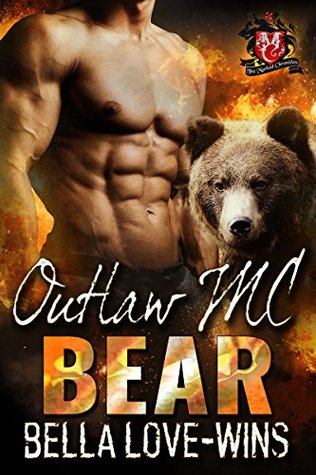 I have to admit that I am not a devoted fan of MC stories.  I have a few that I’ve enjoyed, and I must be honest that any MC (paranormal or not) has to be equal to Motorcycle Man by Kristen Ashley in her Dream Man series.  If the hero cannot be somewhat like Tack in my mind, then I usually don’t review the book because it wasn’t high on my enjoyment range. (Hey, we all have our triggers and buttons – Tack is the tops in sexy anti-hero for me, and I suspect he always will be.)

I haven’t encountered a Motorcycle Club Shifter Romance until Bella Love-Wins’ title scrolled across the bottom of the Amazon page I was on.  The idea intrigued me so I took a chance and clicked.

What I discovered in Outlaw MC Bear was a detailed, sexy, intense story with vivid characters, an involved (but not convoluted) story line that I could easily see myself following throughout the series, Beartooth Brotherhood MC.  Silas may not be Kane “Tack” Allen, and Sabrina is no Tyra Masters – but they are close enough in theory to completely enjoy.

The Cover Description of this novel sets up the story very well, and I don’t feel the need for further teasers.  Silas can be an absolute jerk – but to be fair, Sabrina wasn’t exactly forthcoming with information that he actually needed to keep her safe.

If you enjoy Motorcycle Club intensity and shady dealing and if Shifter Romance is high on your reading list then Outlaw MC Bear and the series should be on your reading radar.  A completely enjoyable story with an intense, believable couple and secondary characters who will grab your imagination while you wait for their stories – this was a story that I would recommend without hesitation.