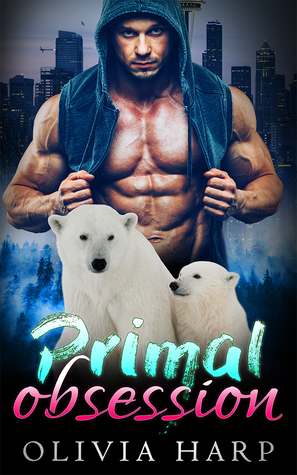 After having her heart shattered one time too many, curvy photographer Cassie Bennett vows to never fall in love again, focusing only on her career.

But when she has an accident in the middle of nowhere, leaving her stranded and unable to get help, a deliciously sexy hunk of a ranger comes to the rescue, setting off an avalanche of emotions that she thought she no longer had with her.

The only thing is, he’s a single father, and definitely not looking for someone.

Warrior bear shifter Raiden Waller wants nothing to do with having a mate. He’s to blame for a big tragedy that befell his family ten years ago, and now takes care of his only daughter, the energetic, spirited Deedee.

His life gets turned upside down when he meets Cassie, a sexy as sin woman whose curves make his inner animal roar in desire for the first time in a decade.

He wants to fight the urge to be with her, but his polar bear refuses to let go, calling her his fated mate.

But he can’t claim her, especially now that an old enemy resurfaced, threatening to take everything away for a second time…

Raiden and Cassie’s romance takes a slightly different turn from the earlier stories we’ve had of the White Paws clan who defend the forests and keep our world a bit safer.  This time Raiden and his daughter Dee are on a road trip to her grandparents home where she’ll take part in the traditional “Walk” with that shifter side of her family.  Raiden once lived near by, and still owns land and a cabin in the woods.  The area has bittersweet memories for him as it was here that he lived and loved with his first mate, Dee’s mother.  And it was here that he fought the Rot, rescued his daughter and lost his mate.  He will always be a bit uneasy here, but his in-laws have convinced him that all is under control and Dee will be safe.  He has to trust them – but he also has to keep his instincts sharp for the evil that once controlled this area is still out there somewhere waiting.

Cassie and Raiden meet accidentally at a diner where both have stopped for a quick drink.  Attraction flares, but Cassie’s low self-esteem brushes it off and Raiden’s determination to have one girl in his life.. his daughter… only, well he ignores the signs.  Fate seems to have other ideas when a short time later Raiden and Dee come upon a motorist alongside the road obviously in trouble.  As Dee convinces him to stop, he soon realizes it’s the woman from earlier – and fate wins this round.

I enjoyed Cassie and Raiden’s romance very much.  He’s as dominant as a polar bear shifter can be and she’s second guessing everything in sight.  They both make assumptions and mistakes, but the draw is there in spite of circumstances.  The tension builds throughout the story as we wait for that other shoe to drop, knowing the Rot was here once, and fearful that it will strike once again.  Dee has a few surprises in store for her dad as she becomes more than anyone ever thought possible.

Lots of sexy tensions and steamy moments, an underlying sense of danger and truly likable characters make Primal Obsession one of those stories that are hard to put down once you start.  Any Shifter Romance reader would enjoy this one, and I’d highly recommend the entire series – knowing there are more to come.