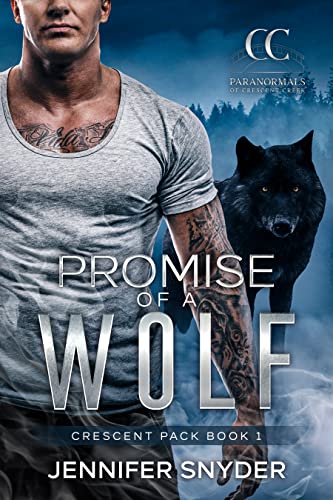 His wolf has always wanted her, and now she’s finally returned home. Will the two find love or will secrets stand in the way?

Callum Beckett has worked hard to build a life for himself he’s proud of. One that includes putting his past behind him and cutting ties with those in his old Pack. Now, as alpha of the Crescent Pack, he’s made himself a home. All that’s missing is his mate.

Nadine Beverly always thought two things were certain in her life: she’d never return to Crescent Creek again, and she’d spend the rest of her life with her high school sweetheart. She was wrong—on both accounts. Now she’s back in her tiny hometown, hitting the reset button on life, and catching the eye of the guy she had a huge crush on growing up.

Love won’t come easy for these two though, as Nadine’s ex isn’t willing to let her go. When the situation with him takes a turn for the worst, Callum and his wolf will do whatever it takes to ensure Nadine remains safe—even if it means revealing he’s a wolf shifter.

It’s possible to go back home, there are simply a lot of complications when that needs to happen.  Nadine had put her small hometown in the rearview mirror when she left with her boyfriend and never considered looking back.  Now, several pain-filled years later, she’s returned home to start over again… if her ex will let her, and that’s a huge “if”.

Callum has made the break with his old, abusive pack and along with a few others created a new pack, a new home for them, a second chance to live a good life on their terms.  It’s been far from easy but he’s learned that anything is possible.  Like seeing Nadine back in town again, and realizing that the spark he’s always felt around her never really went away, it simply went dormant for a while.  But Nadine is on the run, that’s obvious, just as her need to wipe the past few years from her soul and from the branding that one nasty piece of work placed on her wrist… a gift supposedly but in reality a brand of ownership that Callum will help her erase.  He has the artistic talent to do that, but he also has the heart to see the woman who is his mate happy, content, and safe… with him.

Promise of a Wolf isn’t a very long introduction to the Crescent Pack series, but it does pack an emotional, powerful punch.  Nadine is human, and Callum is a wolf shifter in a world where people are somewhat aware of the rumors but shifters have not come out to the humans… more like using magic to have them (humans) forget what they might have seen.  When Nadine’s ex shows up in town to make trouble for her, Callum is right there to defend and protect his mate.  I loved the interactions between this couple.  It’s obvious that there have always been some underlying emotions between them but were never acted upon until now.

There is intensity here, tensions, and some dangerous moments for Callum and Nadine.  There is also the blooming of love, the start of a new beginning, and the secret that Callum and his pack hold will become Nadine’s secret as well.  We meet a few secondary characters who may play a larger part in the series at some point.  Promise of a Wolf is very much an introduction, a base from which to build this new world.  I loved being in this world, and cannot believe I haven’t run across this larger series before now.  Good thing I know how to find those earlier Paranormals of Crescent Creek stories.  Although I never felt that I had to read what happened before to enjoy the Crescent Pack series, now I want to and that is when I know a series has hooked me on wanting more.

If you love a good, solid Shifter Romance with touches of danger, passion, and new chances then you’ll want to pick this one up soon.