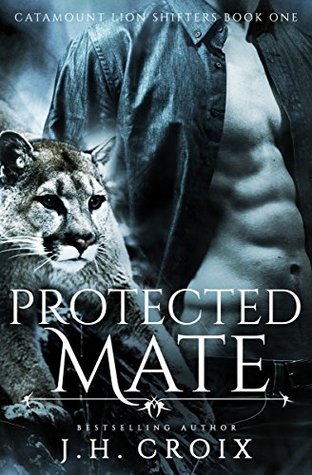 Protected Mate starts off the Catamont Lion Shifters series with a powerful story and some interesting world building.  A tagged mountain lion, thought extinct on the East Coast has been hit and killed by a car, which is bringing national attention to the fact that they may not be extinct at all.  The trouble begins when Dane realizes that the pictures of the dead mountain lion are in fact his sister’s mate, Callen.  How in the world did he get tagged?  And is his death as natural as a car accident?

Shana has gone missing after the news of her mate’s death.  Dane is searching the areas around the outskirts of town where she has known favorite places.  He believes she’s simply wanting time to take in Callen’s death, but still he wants to know that she’s safe.  During his search he steps into the cover of trees as he hears human hikers approach, as they pass he finds his cat is strongly drawn to one young woman… but his sister’s needs are more important right now.  Later in the day as he approaches a cave they often use for shelter he sees the woman limping toward the opening and makes a decision to shift, gather clothes from a hidden pack and investigate.  He probably should have known he was about to meet his mate.

Chloe has had several months hiking the Appalachian Trail without incident – today, so close to the end of the Trail she falls and sprains her ankle along with several deep, painful cuts down her leg.  The cave is a welcome sight as she curls up and falls asleep.  She should have been frightened when she was awakened by a stranger’s touch – but somehow she knew this man with the catlike eyes.  Turns out Dane is a doctor who tends to her injuries and offers to help her back to town in the morning… it’s not safe to try to find their way in the darkness with her sprained ankle.

Dane has several things happening in his life at once now – the mystery of Callen’s death, his sister’s disappearance and now his mate.  One at a time would be enough to deal with but of them all, Chloe’s health and safety comes first.  And he will do whatever he can to convince her to stay, since he’s seen the interest spark in her eyes he’s hoping she’ll be open to loving him… and accepting his cat.

Protected Mate is such an intriguing story.  Often the first story of a series will make or break my interest in continuing the series, so it has to draw me in enough to want more of the whole story.  I have no problem in wanting to know just how bad it’s going to get in this small town as we continue with the series.  The secondary characters are lively, realistic and completely believable.  Their introduction wasn’t an overpowering dump of an entire town at once but more of a slow build of meeting the people in a town we recently moved to.  I know that they are important for their own stories to come, and expect to meet more of the town as we move on.

Chloe and Dane have that just right sexual tension between them, and the feeling that there is more if they will take the risk.  They definitely have their sexy moments but also loving ones and getting to know you times as well.  I believed the process of them growing closer, especially since Chloe is not a shifter so must be introduced to this particular world.  The danger that reveals more of this mystery helps to add action and the need for more information to the series.

Overall, I enjoyed Protected Mates very much and I’ve got the next story already downloaded ready to read.  *grin*  If you love Shifter Romance then this is a story that should be on your reading list.  It’s not brand new, having started last year but publication date means nothing to a great story and this one is just that.