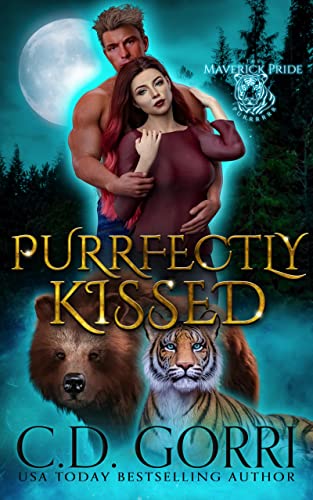 She’s a curvy Tigress searching for the purrfect kiss. He’s a Black Bear who doesn’t want a mate.

The Beta of the Maverick Pride has no desire to find a mate. He’s tried that once, and all it got him was hurt. This grumpy Bear is content to be alone. Or is he?

Jessica Maverick has been searching for her fated mate since she was just a cub. But finding love is hard for the sister of the Pride Neta. How’s a girl supposed to have a sex life with her big brother breathing down her neck?

Determined to find her mate, she seeks out Uncle Uzzi’s impeccable advice.

Will this dauntless Tigress catch her reclusive Bear?

*a form of this story was previously published in 2019 as part of the PDA-Paranormal Dating Agency world.  The base story is the same, parts have been revised to fit this new world.  It’s possible you’ve read this, but you haven’t read this version of Purrfectly Kissed so don’t miss out, just an FYI*

We met both Jessica and Brayden in the previous story, and there was definitely a spark and interest there to build on.  Now, Uncle Uzzi is about to get involved and shenanigans will abound before these two find their way to fated matehood.  Purrfectly Kissed was such a fun read for me.  Jessica is already purring for the man (or bear) that she instinctively is drawn to but he’s fighting that attraction tooth and nail for his own reasons (not good ones).

Aside from the sexy moments between Brayden and Jessica, I love this one for the women’s power, the tribe that the women of the Maverick Pack, and those entering into this pack are creating.  These are no sitting on the sideline ladies at all, and when danger comes for those they love they will not hesitate to step into the fray to defend what’s theirs.

While one problem might have been resolved previously, there are always those lingering effects that need to be cleaned up – and that’s what we’ll find in the dangerous and action-packed portions of Purrfectly Kissed.  Yet mostly we’re finding a bear shifter who carries the past into the present and believes himself unworthy of love and a true mate.  It might take some action on Jessica’s part but she’s so going to prove him wrong on that.  This is one stubborn tigress who is trusting her instincts, even when she’s feeling unsure, she still believes that Brayden is hers no matter whatever happened in the past.

My heart broke for Brayden as he accepted and moved beyond his past.  Together they are a funny, sexy, perfect couple even if it took a bit to get to that point.  Stubborn bears.

I enjoyed my return to this world for an engaging, sizzling romance that kept me flipping pages.  If you love a good, solid Shifter Romance with characters you’ll be emotionally engaged with (yes even anger for the bad guys), love rooting for the underdog, or simply love a good love story… then Purrfectly Kissed is the book for you.