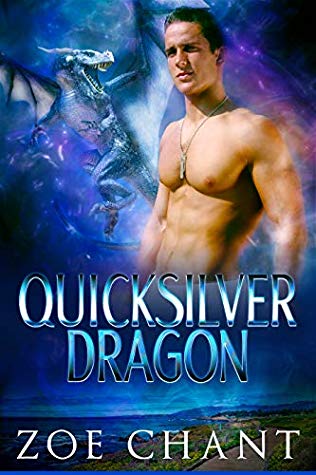 Sometimes I come across a story that – captivates – is the only word I can use that conveys the magic and intensity that makes one book stand out from all the rest.  Quicksilver Dragon is such a story.  The problem becomes… how can I talk about a story that is unique, introduces a new concept, totally unknown entities, and vile new villains without giving away far too much of the plot.  The fact is that I cannot.  That simple.  I’m going to have to let the Cover Description speak to those things and leave the rest up to your own discovery.

What I do feel comfortable saying is that Lindsay and Boone are a couple you will quickly become invested in, will like them individually and together on the spot, and will become caught up in their new journey quite quickly.  There is an ease and familiarity with and between this couple that drew me in from the very start.  I liked them when they first met, I fell in love with them as they began this amazing transforming journey into danger, the unknown, and a love that will last a lifetime (a very long lifetime it seems).

This needs to be the prelude to or the first story in… a series.  Yes, it does need to one day be a series for there are characters we’re introduced to that I need to know more about, I want to discover their journey as well — and there are… questions I’d love to see answered.  So, yes, I would love for Quicksilver Dragon to be the beginning of a series one day for I want more of this particular world.

I’d not hesitate to recommend this story to any Shifter Romance or Paranormal Romance reader who loves a good story, something a bit different, dangers to be faced and a couple to root for.

I own a Kindle edition of Quicksilver Dragon.