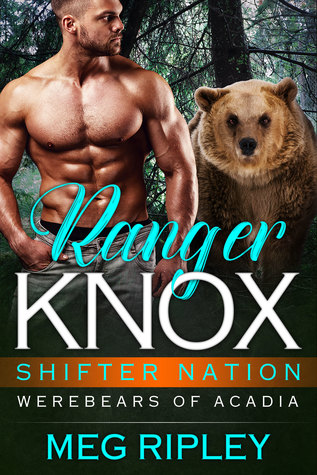 I’m pledged–as every shifter is–to keeping our kind and its history a secret.

Because of my role as head ranger at Acadia National Park, as well as the Alpha of my clan, I have the responsibility of making sure no outsiders know about the real reason why our park came to be. Hannah, a journalist who’s been snooping around, doing research for an exposé, is most definitely an outsider, no matter how much the ursine part of my brain keeps insisting that she should belong to me.

She should be mine. Except she’s not a bear–she’s not any kind of shifter. How could I want her? Is it possible that a human…could be my mate?

And how will I keep her from unraveling the mystery that has kept us safe from the public eye for generations?

Ranger Knox begins a series with an interesting premise.  Were our National Parks actually hiding some very sacred, uncharted lands solely for shifter purposes?  While Hannah doesn’t know about shifters, she does have a nose for scenting out an interesting story, one that could just cement her promotion if she plays this out just right.  She’s been given an enforced vacation command of either use it or lose it – so she’s using it to do some research at the location of what might well be a very big story.  She’s stepping into trouble blindly, believing she knows what is going on when she hasn’t a single clue.  Before this is over Hannah will find herself in danger – and having to make a decision of a lifetime… write the story that will make her career or drop the story for the sake of the man, the bear shifter she’s come to love.  Tough choice for Hannah because both are important to her but only one can win this time.

Knox has his hands full and it’s going to get even more complicated.  As the alpha of his clan he has to keep his people safe, that includes visiting shifters to the park and non-shifters as well.  Hannah is his mate, he knows it, doesn’t want to really believe it because she’s human and doing her best to out shifters for her story…and she seems to have attracted the rogue shifters who are up to no good in the park as well.  Knox has to find a way to keep his mate safe, explain what he is and what the park represents to the shifter nations  all while convincing her that there is no story here.  Right, that’s not going to be easy.

Ranger Knox is an intense, short shifter romance that captures the imagination.  There are bonus books attached to this story, so the actual Ranger Knox story stops rather early on, the rest are bonus books.  Hannah is… something.  Stubborn, suspicious, determined and never gives up on a goal.  She’ll make a great alpha’s mate, but she certainly runs Knox in circles before they get to that point.  I enjoyed this fast  paced romance and I’m looking forward to continuing the series.  I’d recommend this one for any Shifter or Paranormal Romance reader.