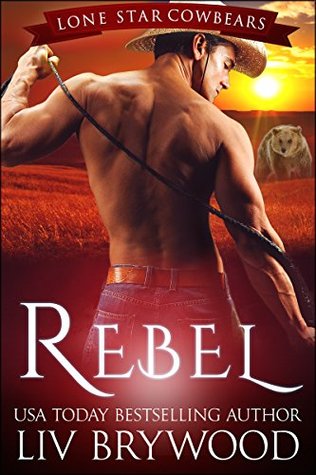 If Kim doesn’t win the Bigger in Texas Barbecue Competition, the bank is going to take her house away. Her mom’s medical bills are piling up and she’s desperate for a way to pay them. She can’t let anyone get in her way, especially not the cocky, naughty cowboy who thinks he can seduce her with his dirty mouth. He’s exactly the kind of distraction that will cost her everything.

Zack Grant loves his chicken wings spicy and his women scorching hot. If he can claw his way through the competition, he’ll win enough money to buy his dream home. But his sexy competitor is driving his bear wild. After one whiff of her alluring scent, his bear wants to claim her as their fated mate. But he needs to keep his hands off of his delectable opponent if he has any hope of winning the prize.

Titles in the Lone Star Cowbears series include:  Rebel – Renegade –

Rebel Cowbear begins the Lone Star Cowbears series, which is loosely connected to the Curvy Bear Ranch series.  While Zach and his brothers and sister are definitely bear shifters, there’s more romance than shifter in this story.  We’ll get to see Zach’s bear come out to fight with some no good gator shifters but aside from that this one is more on the romance side.  Which is fine with me, I’ll love my sifters no matter how I get them  *grin*

Kim is worried over mounting medical bills for her mother.  Mom is battling cancer and while the emotional toll is bad enough, the bills simply keep on growing, even with insurance.  Both are addicted to food shows and during one Kim sees an announcement of a BBQ competition with not only a food show for the winner but $100,00. prize money as well.  That would go a long way toward getting those bills out of their lives.  With encouragement from her mother, Kim sets out for the small town determined to blow the competition away with her abilities.  She never could have imagined what else was in store for her in this small Texas town.

While Zach’s family business is the ranch, cattle and the cabins they rent out, Zach is longing for a place of his own.  Sure he loves his siblings and would never want to be far from them or the ranch.  But this spread was big enough to put up a dream house, one all to himself.  To that end, Zach is determined to win the BBQ competition at the fairgrounds this coming week.  He’s love for cooking as a way to work off stress and now simply for the enjoyment of new creations will help to ensure that prize money ends up in his bank and in his new home.  Nothing can stop this shifter cowboy, except maybe discovering his biggest competition happens to be his mate.

I fell in love with Zach and enjoyed Kim.  Together they make one interesting, feisty, hot couple.  While there were a few times I really wanted to set Kim down for a firm talking to, in the end she pushed aside her stubbornness and let love win.  And their romance did heat up not only the fairgrounds but the bedroom as well.  I liked them both, they each had good reasons for what they wanted and also reasonable differences in how to get there.  Toss in some extreme bullheadedness, some no good gators and a family that I look forward to learning more about – and you have one heck of a good story.

I would recommend Rebel Cowbear for any Romance, Paranormal or Shifter reader.  A good story, steamy moments n and out of the kitchen, and likable characters.  Now, I’m off to pick up Renegade Cowbear, the next story in this series.