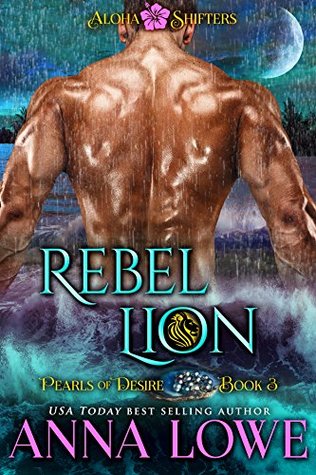 Lion shifter Dell O’Roarke has never been serious about life, but life is about to get serious with him. The beautiful stranger who’s just arrived in Maui isn’t just looking for anyone — she’s looking for him. And that’s not just any surprise she’s brought along — it’s a baby who looks a hell of a lot like Dell. Soon, he discovers there’s more at stake than his lifestyle as a swinging bachelor. Vengeful shifters are hot on the stranger’s heels, making Dell wonder… Are they after the woman, the baby, or him?

Ad executive Anjali Jain hasn’t taken a vacation in years — and she sure isn’t on vacation now. She’s simply keeping a promise, and then she’ll get back to climbing the corporate ladder. But there’s nothing simple about taking care of a baby — or handing that baby off to a handsome, mysterious stranger who feels like a long-lost friend. Easygoing Dell isn’t her type, but the more he reluctantly reveals of his hidden, soulful side, the deeper she falls in love — and the more mysteries she discovers. How can one man possibly awaken so many lusts and desires at the same time? What evil forces lurk behind the brutal murder of her best friend? And why does she have the feeling there’s something not quite human about the murderers — or about Dell?

Rebel Lion is much like Dell himself.  A bit softer, a touch more lighthearted, not slower but more leisurely, more laid-back… yet, along the edges of this new domestic scene slithers a whisper of danger to come.  Yeah.  Very much like our lion shifter, Dell O’Roarke.  For me, Rebel Lion was very much a story divided into two sections.  At first we discover that Dell has a niece, a tiny baby who never knew her father and has tragically lost her mother.  To say that Dell’s world was turned upside down in that moment would be an understatement.  And not only about Quinn, for along with the baby Dell’s mate has also stepped into his life.  Anjali is everything Dell never dreamed possible for himself.  Sure, she’s career driven, lives back in Chicago and probably wouldn’t look twice at him on a normal day… but, still.  There is an immediate spark, a knowing in her eyes even if she doesn’t really understand the part destiny plays in anyone’s life.

To be frank, I was disappointed in my beloved shifters.  Yes, you read that right.  From the moment Quinn appeared they didn’t have any confidence in Dell to be able to raise her, perhaps on his own.  When they started tossing around other options for Quinn, my blood began to boil.  Yes, it did.  It was sad to me to see these men and women who knew Dell, fought beside him, shared his secrets, and admittedly knew him as a carefree, live for the moment kind of man.  That they would put forth such a suggestion, that their faith and belief in their friend, brother was so low… I hurt for Dell, very much.  And I wanted to start slapping people upside the head.  Yes, even dragon shifters at that moment.  I wanted to ask Cynthia how she’d feel if anyone dared suggest that future for Joey.  Yeah, flash fire for certain would be the answer.  Throughout this personal drama Dell and Anjali are slowly falling in love.  Oh, Dell’s lion knew they’d found their mate but the man was too busy seeing how it couldn’t work at first.  Everything changes when this newly formed family return to Chicago for the official signing of papers.  Absolutely everything.

And here is the second section of Rebel Lion.  The fight til the death, defend the mate and cub moment.  The edge of danger has been slowly building and it comes to a head when we’re confronted with an old enemy, and learn her plans.  The enemy that went after Quinn’s mother has joined forces with a more powerful ally and the fight is on to protect, to defend what is most important in Dell’s life.

I was captured all over again with Dell and Anjali’s story.  There is a different feel to their story, one that is very much in touch with Dell’s personality.  Watching Dell learn the joys, fears and delight of fatherhood was such an enjoyable experience.  Also, watching the confirmed bachelor falling was a special delight.  I wasn’t the least surprised that Dell’s story involved a little one, you only have to see how he is with Joey to know what a great father he’d make.  We’ve learned a bit more about Cynthia this time… and waiting for that shoe to fall is going to be agonizing.  I absolutely loved Rebel Lion for its differences and for the continuity as well.  Life is full of unseen corners to be turned, and Dell did that so well.  If you love Shifter Romance or have followed this series then you need to pick up Rebel Lion.  Fascinating characters, detailed story lines, threads woven through each story that connect them all … and simply a damn good story.  Indulge yourself and enjoy another trip to Magnum’s estate (grin), you’ll enjoy the trip I guarantee.

I own a Kindle edition of this book.