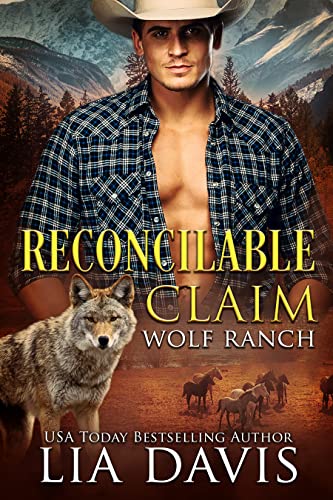 Sawyer Kelmount’s destiny is at the head of the pack, but becoming Alpha was supposed to happen much later in his life. Grieving the loss of his father forces him to slowly accept his new responsibilities, but as he steps up to lead the others on Wolf Ranch, he’s haunted by his loneliness and the mistakes of his past. Surely this would all be easier to accept if his mate were still here.

Erika Morrison is happy with her life in L.A., but when she learns that Sawyer’s father has passed away, she dutifully makes the trip home to Wolf Ranch to attend the funeral. Expecting Sawyer to be as distant and aloof as always, Erika is surprised that the new pack Alpha wants her help with the ranch’s finances. And being near him again sparks the embers of an old flame that never really burned out.

As Erika sorts through the books for Sawyer to figure out what’s really going on, one phone call forces her to make a difficult decision: return to L.A. or stay on Wolf Ranch and work things out with Sawyer once and for all.

Titles in the Wolf Ranch series include — Reconcilable Claim —♥— Protecting His Claim —♥— Staking Claim —♥— Family Claim —♥—
This is an adult 18+ story that contains language, possible violence, and/or sexual situations geared to an adult audience.

Reconcilable Claim begins the Wolf Ranch series with a story that is emotionally charged from the start as mates reconnect once again as the woman Sawyer loved and lost to the world beyond returns for his father’s funeral… and Erika will return back to that other world just as quickly as possible.  They might be fated mates, but when one denies or ignores that bond, well, what’s a cowboy to do but honor his lady’s wishes against his better judgment?  But something isn’t quite right at the ranch.  And while Erika cannot deny that she has a life outside of this small community that she fully intends to return to – the draw back home to her mate is growing stronger each day and she will have to make a choice once again to live her life her way and break both of their hearts again.  Or stay and take the risk that Sawyer and this life will be enough.

I was easily drawn into Erika’s and Sawyer’s romance.  It’s intense yet tender, dangerous but comfortable, passionate and loving – exactly what I look for in a Shifter Romance.  We’ll meet some secondary characters I cannot wait to see their stories unfold, as well as watch mates reconnect and acknowledge what they mean to each other.

I had a blast with Reconcilable Claim and would not hesitate to recommend this story and series to anyone who loves a good story, interesting characters, and a plot that will keep you guessing until the end.