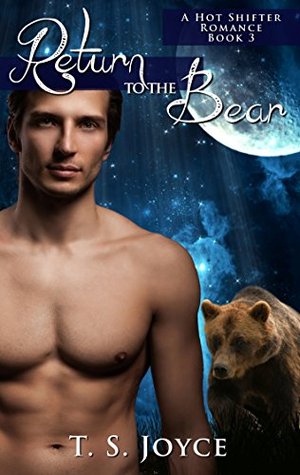 Joanna is trying to survive in a clan of battle-hardened bear shifters, where the alpha wants her for his own.

When Brody Bannister, Benson Riker’s most trusted councilman, accuses her clan of holding Hannah Michaels hostage in their camp, Joanna must decide where her loyalty lies. Should she help the handsome stranger save Hannah at the risk of her own life? Or should she accept her destiny and take the throne as her alpha’s mate?

Filled with adventure, action, romance and redemption, Return of the Bear will take Joanna on a journey of self-discovery to Bear Valley, with a mate who just might prove true love exists after all.

All Shifters are sensuous creatures who do not hesitate to express their love for their mate in a hot and sexy physical way – definitely an 18+ story.

Read on for my thoughts on Return To The Bear.

The Long Claws clan is a vicious, nasty clan lead by an insane, power hungry Alpha, Nathan.  Over the past few years, Nathan has lead the Long Claws into battle to take over other clan’s property and leaving few, if any survivors behind.  Joanna unfortunately captured the attention of the current Alpha during one of those raids – and his insane desire to have her as one of his numerous mates is his one insatiable need.  Joanna has done everything in her power to avoid her Alpha’s touch, he may insist that she be in the room while he takes another of his mates… but she’s desperate to not be claimed by this man who she hates with every fiber of her being.

Remember Merit?  That sleazy whore of a scumbag who is always out to make trouble?  Well, she’s hit the jackpot this time.  Hannah, the mate of the Bear Valley Shifters has been kidnapped and hidden on the property of the Long Claws.  Merit is using Hannah as a bargaining chip with Nathan and as part of her own revenge against Riker.

When Brody, a member of the Bear Valley Shifters enters Long Claws territory, he is on a mission to discover if Hannah has been taken by them.  What he didn’t expect was the lovely and spitting mad Joanna to capture his attention.  His instincts tell him that Nathan is lying but he has no proof.  When Joanna makes a bold move and offers to find his Alpha’s mate in exchange for him claiming her neither one has any clue of the events their agreement will put into motion.  Or that the one true love, the mate that each of them needs is right there in front of them – if they are brave enough to acknowledge that fact.

I really enjoyed Return To The Bear.  We are getting in deeper to the overall story and the action is fast and the sexiness between mates is skyrocketing.  Brody and Jo make a very good couple.  Each has hidden scars, issues that they haven’t truly dealt with, but now have to if they want to keep the one person who matters most with them.  We also see Nathan fall deeper into his insanity and ruthlessness.  Hannah and Riker continue to be a part of each story and it is such fun to watch as Hannah develops before us, not as the frightened woman she once was but as a strong, funny and lively mate to Riker.

As we begin the third story in the Bear Valley Shifters series I think it’s time to say something about reading order of the stories.  Often in a series you could pick up a story out of order and be able to get what you need as far as back story goes rather easily.  While that is true with this series – there is a bit more to consider.  Bear Valley Shifters presents several connecting stories centered around the Alpha and his Mate and situations that are happening very close together time wise. One thing leads to another, then escalates more and then conclusion – so I have to say, for me, reading order for this series does matter.  Yes, you’d enjoy it read in any order – but the story flows, the people matter, the events that are happening to them all feed off of the previous stories.  I believe your enjoyment of this series would be grater if read in order.

If you love Shifter Romance then this story and this series should be on your reading list.