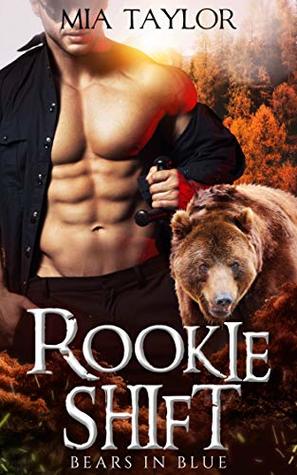 For years, I spent my life moving across America, fleeing some unknown enemy with my mother and as an adult, I swore I’d never run again.

Unfortunately for me, a past I never knew about is about to slap me in the face, one wrought with supernatural forces.

My training officer, August stares at me like he knows something about me but nothing throws a wrench into my destiny like the untimely arrival of a dark shadow from the past.

And now August has to train me on much more than just policing.

This is an adult 18+ story due to language and sexual situations.

Titles in the Bears in Blue series include — Rookie Shift –

“Rookie Shift” is the first story in the Bears in Blue series.  And while August and Melissa’s story is a good Contemporary Police Romance… I found very little Shifter or Paranormal Romance in their introduction to this new – to me – world.  Aside from a particular phrasing of a woman’s strength with a “wink wink” feel to it there is no indication that this is a Paranormal Romance until beyond halfway through… and even then there is no shiting, no meeting their bears only innuendo and an assumed angry partial shift.  And to say more would ruin the story for others… so that’s as far as I’m going to go with that thought.

Each author brings their own spin to the world of shifters, adds a bit to the lore or creates their own unique world.  That is what Ms. Taylor has done in “Rookie Shift” yet I wasn’t drawn in.  Judging by the high star reviews on Goodreads, many readers love this world… and that is fantastic.  Honest it is, not everyone is going to love every story, and there is definitely an audience that enjoys this world.  For me, it was a good, enjoyable story but not one that I’ll be on tenterhooks until the next one in the series arrives.  At some point, I’ll pick up the next story in this series as I refuse to judge an entire world on only one glimpse into it… that’s not my way.  The thing for me is simple… when I read Paranormal or Shifter Romance I’m looking for the magic, the unexpected, the fantasy, the what if’s… and while I found a good Romance, I didn’t find the magic in “Rookie Shift”.  Remember that any review is only that person’s reaction to any book… you should read this one and decide for yourself how you feel about it.  That’s the only fair way to judge a book, is if you’ve read it yourself.