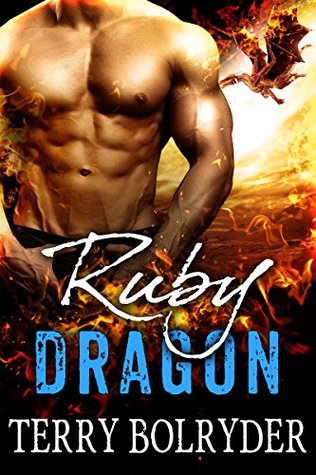 Red used to have it all. Sexy, powerful and attractive to all women, as the ruby dragon he had the world at his feet. But now he’s awakened and collared, unable to use his powers and alone in the modern world. His only company is his insane adopted cat and Faye, the curvy, sweet neighbor who makes his dragon sit up and say ‘mate’. Too bad the only woman he finds irresistible has no trouble resisting him.

Faye doesn’t know what to do with Red. He’s always causing trouble, between his cat making noise at all hours or the women constantly chasing him. But he isn’t like the hot jerks she has met in the past. Yes, he’s sexy, with green eyes and a body to die for, but he’s also kind, funny, and needs her help. He’s also willing to protect her from her ex. So despite her mistrust of men, he might just be slowly winning her over.

Though men have let Faye down, Red is sure she just needs the right dragon to help her find her wings again. He just has to do it before the evil creatures after them catch up.

As the Ruby Dragon is awakened and set loose on the modern world we are -gifted?- with a man who is certainly one sexy devil and he knows it – after all, sexiness is one of his dragon powers.  Who Knew?  But in today’s world that’s not going to do him many favors, in fact it’s going to be downright annoying.

Red manages to get himself kicked out of his host’s home almost immediately with his flirting and name calling of Zach’s mate – even if Erin did giggle and roll her eyes at the handsome man on the doorstep.  No, this sexy dragon has been sent off to his own apartment far away from the mates of Zach and Luc – not that Red would actually do anything but flirting and sexiness simply is… what he is.  As with the other dragons, Red finds himself in possession of a pet – one crazed orange fir ball called of all things, Pumpkin – who absolutely hates Red’s touch.  Pumpkin is very vocal about his dislikes and displeasure with this dragon and soon his caterwauling will bring one beautiful woman to Red’s door.  One woman who is not at all charmed by him.  But instead demands that he shut that cat up or else.

Faye wants nothing to do with her neighbor except to get his cat to quit the yowling all hours of the day and night.  Okay, the guy might be handsome as sin, sexy as possible and oh so tempting.  But she’s going to resist temptation because she always picks the worst possible men and her ex has taught her to be very leery of jumping back into that situation once again.  Red isn’t about to take no for an answer, especially when he knows that Faye is his mate.  With some modern day dating tips from the other dragons and their mates, and some well timed dealings with the nasty piece of work that is Faye’s ex, he just might win the girl after all.  Anything worth while is worth the battle – and it’s going to be a battle of wills.

I have to admit that I always get a chuckle when a strong woman puts a far too sexy for his own good man in his place.  And I enjoyed Faye and Red’s interactions very much.  Oh, poor Pumpkin certainly didn’t like Red, but Faye was another story.  *grin*  Our resident mean child, aka the Emerald Dragon seems to have a bit of niceness in this one – let’s hope it sticks this time.  There is danger, new enemies and plenty of action.

I enjoyed my time with the Ruby Dragon and his mate.  An interesting pairing that works very well in the end.  Aegis, the Emerald Dragon, is the story that I looked forward to the most.  The need to know what type of woman could turn this man around is… enticing.  But, there are a few other dragons to meet and get their stories first.