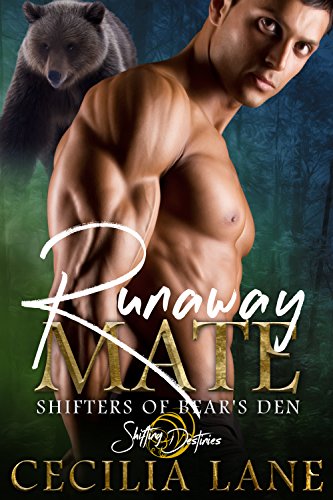 A bear prowling the edge of danger.
Gray Jennings has a problem. One that could get him put down by his alpha. It started when a rogue military commander laid siege to the town of Bearden and months later, Gray is still shifting in his sleep. His lack of control marks him as a hazard to both humans and other shifters.

He knows the danger he poses.

So when rich girl Meghan Wilcox comes to town, he vows to stay far away. The last thing Gray needs is a distraction. Even if Meghan’s curves and fragile beauty bring out his protective nature.

But the girl’s got a secret and worse, her sweet scent stirs his angry bear.

A girl hiding from her enemies.
Meghan’s on the run, hiding from a vengeful ex-fiance after she dumped him at the altar. He’s humiliated and hunting for her, intent on payback. Out of sheer desperation, she seeks safety in the small town of Bearden. Tucked away in a secret cabin, Meghan feels the glimmers of hope. Finally. But a new threat soon arrives in the shape of a terrifying shifter.

A bear who has shifted in his sleep. Gray Jennings.

Meghan gentles him and they form a tentative truce. A bond links her to the formidable shifter, but he’s savage and unpredictable. Has she traded one danger for another?

Meghan’s past won’t stay quiet. Just when her heart is on the edge of loving this untamed shifter, danger looms, threatening all she holds dear. The only one who can save her is the wild and feral bear.

“Runaway Mate” is the fourth story in the Shifters of Bear’s Den series, which is part of the Shifting Destinies world.  All of the titles in these series which make up their own world can be found on the Cecilia Lane page.

It’s been a year since the magical world of fae, vampires, and shifters were ousted to the world.  A year since the citizens of Bearden had been rounded up, taken from their homes and marched to this very clearing.  A year with so many changes, a year where his bear is out of control and Gray’s future is not looking good.

Meghan finally found the courage to make the break from the almost biggest mistake of her life.  Too bad her now ex isn’t about to let her slip from his control so easily.  The newly opened magical enclave of Bearden is the one place she’s certain Bentley will not look for her… she couldn’t have been more wrong.

“Runaway Mate” is a fast-paced, intense look at the changes that have come to Bearden, how the need to register is destroying lives and how one out of control bear finds his mate in a most unlikely human.  She’s trouble with all caps, but she’s his mate and he’ll do anything at all to keep her safe from the threats against her… and even from himself.  Meghan and Gray’s journey to happiness is going to be a very rough road.  Along the way, we’ll catch up with other couples, the clan and the town as they are today.  If a worthwhile villain to truly loathe is part of your reading requirements, then Bentley fits that bill perfectly.  I’ve hated many a bad guy character, but he’s in my top ten of the worst of the worst.  I enjoyed stepping back into this world again, and I’m definitely looking forward to Sawyer’s story up next.  I would not hesitate to recommend “Runaway Mate” or the entire Shifters of Bear’s Den series to any Paranormal Romance or Shifter Romance reader who loves a good, intricate story, characters to both love and loathe, action, danger, steamy moments and the unexpected chuckle as well.