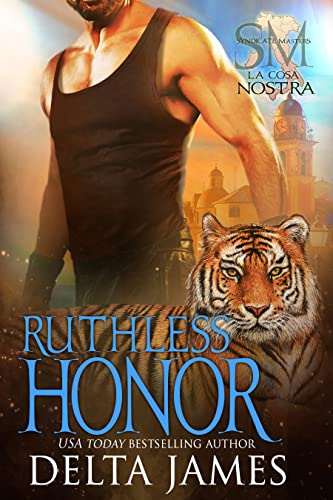 His power is absolute.
No one crosses Roman Genovese and lives to tell about it.

Zia
I am a master thief, a cat burglar. I manage to get access to Genovese’s estate under false pretenses. He thinks I’m there to attend a fundraising gala; he’s wrong. What I want is a priceless Michelangelo he keeps in his study.

From the time I arrive at his estate, I am drawn to the compelling gangster in a way I have never experienced. Having sex with him was a mistake… a BIG mistake. He isn’t a man to let go of what is his, and there’s no question that I am.

But staying with him is not part of my plan.

Roman
From the moment she entered my home, I knew she would never leave. Her scent filled my nostrils and I knew I had found my fated mate.

There are secrets hiding in her eyes, but I will discover them all.

She is mine. The bratva has taken her and is keeping her in a gilded cage. They mean to use her against me and force me to honor their demands.

My tiger will show them the ruthless honor of La Cosa Nostra.

Ruthless Honor is a wickedly sexy beginning to the dangerous and intriguing world of La Cosa Nostra, part of the Syndicate Masters world.  This was my first experience in this world and I did not feel the least bit lost, the transition into this new spin-off was smooth as the intensity of the story quickly ratcheted up.

Zia and her sisters have had a rough life, and their answer to that adversity is fascinating and challenging.  As a master thief, Zia has made many people pay for what was done to her family while ensuring that she and her sisters continue to survive on their own.  She’s very good at what she does and she’s going after a huge prize nestled in Roman’s estate.  But this heist isn’t going to go quite as Zia expected.

There is a lot to be found in Ruthless Honor, an intricate plot, some dangerous situations, rich history for Roman, a new life for Zia – and some intensely sexy Dom/Sub moments.  The villain here is particularly vile, and I wasn’t the least bit sorry when they got what was due for their actions.  I loved Roman even if he is overbearing, arrogant beyond measure, and sexy as sin.  There were enough glimpses of another Roman to give this man my heart quite willingly.  I adored Zia.  She’s feisty, fierce, stubborn, and resourceful.  Her antics produced more than a few chuckles and mental fist pumps along the way.  I got lost in their world, and I love when a story takes me away from my world and deposits me in the world of the characters so smoothly.  I had fun here, and really, that’s the entire point.

If you love a definitely sexy romance, some battles of will, a taste of danger, and an unusual love that blooms in spite of how it started… then you’ll love Ruthless Honor.