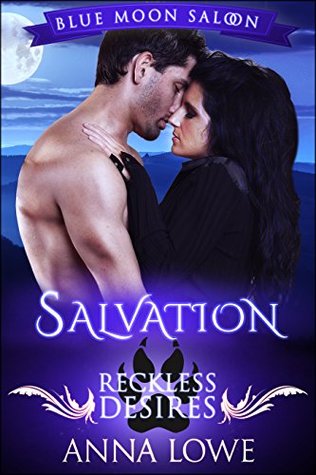 Anna Boone won’t give up the search for her cousin, Sarah, who everyone assumes dead.

And she refuses to give up on the wounded bear found next to the ashes of her cousin’s house. There’s something deep in his eyes and in his soul she just can’t resist. Something special. Something…human, almost.

When her search for the truth leads her to the Blue Moon Saloon, Anna finds more than she ever bargained for — and unwittingly leads a deadly foe to those she loves most.

The devastation brought about by the crazed, radical purist group continues to change the lives of those couples that they target.  Obsessed with keeping the shifter species pure and not crossed through the love of people who happen to shift into different species, they have killed many, burned down homes and destroyed lives.  Anna has no idea of why her cousin’s home was burned down, why her cousin is claimed to be dead – because she’s not.  The body found in the burned out building is not Sarah but someone else.  Yet no one will believe her.  During her conversations with officials she learns of an injured bear that was found near the burned ruins.  She’s drawn to check out the bear, as it’s a connection with Sarah as they each held a deep love for all creatures.  For some odd reason she stays near the obviously dying bear, talking to it, soothing his pain and holding out hope that it will survive.  The odd thing is that the bear almost seems to look at her with human eyes, the brightest blue she’s ever seen… but that’s a figment of her imagination.

Anna has been told of a possible sighting of one of Sarah’s friends in Arizona – it’s a long shot, but again fate is pushing her to go check it out.  Going on instinct alone, Anna will head out to find her cousin – not realizing that there is someone watching her very closely.

Todd doesn’t remember much right now, pain is all he’s experiencing.  His bear is badly hurt and close to death.  The sweet voice in his head keeps telling him to live, to fight, to be there for her.  When the human comes in and sits near his cage he is filled with a sense of hope and strength.  And with her help he can escape in order to find… something.  He’s being pulled in a direction, he doesn’t really know why but now he’s going on his bear’s instincts now, and hopefully that will lead them home.

Salvation is an intense story that continues the tensions of this series.  Todd and Anna are a good match, I liked them almost from the first words about them.  Todd is so wounded by so many things.  He’s broken, but around his mate he’s come alive again – in spite of deep heartache.  While it’s been said that you could read this story as a stand alone – I believe that if you haven’t followed the series you at least need to have read Redemption.  These two stories tie in so tightly that you will miss nuances if Salvation is your first introduction to these couples.  As always, in my opinion.

The action scenes are intense, and while the threat may have been lessened it is far from over for our couples.  It’s funny how fate can step in and change everything on the turn of a dime.  Look for a few surprises in this one.  Now I’m off to pick up the next story in the series.  If you love Shifter Romance then this story and this series should be on your reading list.  Likable couples, intense action, sexy times and interesting secondary characters that eventually get their own stories told.  A winning combination.