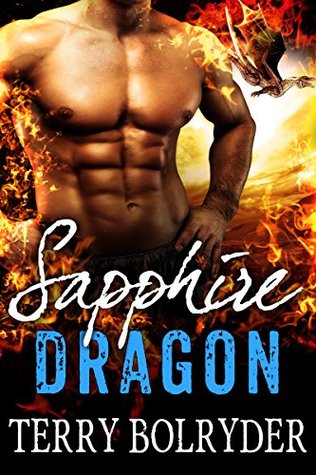 Lucien, or Luc to those who know him, didn’t want to be brought back into the world he left behind centuries ago. As the sapphire dragon, with incredible powers unlike any of the other awakened dragons, he is needed to protect humans in the modern world. But he tried that once and it almost broke him apart. All he wants is to go back into ice, until he meets a kind curvy woman who rekindles the spark of hope within him, and ignites a passion he has never felt before.

Hallie knows exactly how unfair life can be sometimes, but she tries to focus on the positive in life. Like her work helping people and animals at an animal shelter. Still, she never expected a god-like, tall, amazingly gorgeous man to walk into her shelter and say he wants to volunteer, and then admit that he just wanted an excuse to get to know her. It seems too good to be true, other than the fact that Luc seems to be hiding secrets behind his dazzling sapphire eyes.

As Hallie and Luc’s curious courtship turns into a heated, passionate romance, Hallie is seeing more and more signs that her overprotective, supernaturally powerful lover might not be what he appears. And Luc is trying to decide if he can awaken the good in him enough to deserve the only woman who has made him feel alive. But to do that he may have to face monsters from his past, including the one inside himself.

Sexy shifters and their feisty mates who aren’t shy about loving each other – so, this is an adult, 18+ reader tale.
Titles in the Awakened Dragons series include:  Onyx Dragon – Sapphire Dragon – Ruby Dragon – Diamond Dragon – Amethyst Dragon – Emerald Dragon

Luc needed the deep sleep.  As an escape from what he’d seen, what he’d done.  As a refuge from memories that grew more painful each passing moment.  As a prison for his deeds.  His anger and anguish at being awakened is clear from the start, but his purpose has been set for him and his choices are non-existent.

He lands on Zach and Erin’s doorstep as his collared journey into this strange world begins.  While Zach isn’t exactly thrilled to see Luc, softhearted Erin proves her worth once again in trying to help Luc relearn his love for humans.  When Luc first arrives at the animal shelter he is drawn not only to one particular human, but one animal in deep pain.  He knows he could ease the pain of both, but first he has to convince a human who draws him in do deeply that he is in fact trustworthy with both of their lives.  Hallie has known constant physical pain from an accident.  The pain governs her entire life now, if she lets it.  Her struggle to maintain an outward appearance of a happy person is at times very much a mask that shes’s grown accustomed to.

Luc finds his healing abilities, and his compassion for humans once again through Hallie and one hairless cat named Bastien.  But it won’t be easy.  The monstrous actions of humans in his past, and his decision on what to do to those killers still haunts him.  Through his connection to Hallie, he will heal himself – eventually.

I liked Luc and Hallie.  His pain is deep set, her pain is constant yet together they overcome so much and learn to allow the past to slip away and embrace a future together.  The Emerald Dragon, that mischief maker sort of of annoying mean dragon, will again make his presence known.  There is a story there, and even though it’s the last in this series – I’m looking forward to understanding what makes this man tick.

In all, Sapphire Dragon was an enjoyable adventure.  Enough so to keep me glued to the continuation of this series.