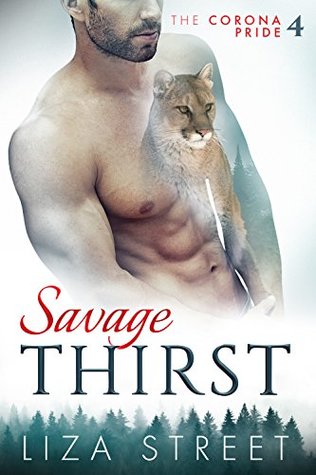 One of the younger vampires in the Corona Mountains, Gracie Jane Moseley has still had over a hundred years to thirst after revenge for her lover’s murder by the local sheriff, Cormac Rhees. When she learns one of his descendants is living right here in Belnedge, Montana, she can’t wait to sink her fangs into him and sate her rage…and her thirst.

Mountain lion shifter Frasier Rhees has been wishing for a mate for years because no woman yet has been able to handle his fierce appetites. But Gracie Jane captivates him, body and soul. Determined to overcome his pride’s loathing of the vampires, Frasier’s willing to do whatever it takes to keep Gracie Jane close, even if it puts him in danger.

Throughout the earlier stories in this series we’ve run into Gracie.  Yes, she’s a vampire but for reasons known only to her she has never directly attacked.  In fact, she has often been the one person to lend what help she can in small ways, or to look the other way when she should be stalking her prey.  No one is saying that the new court that has set up shop near the Corona pride’s home turf aren’t the totally bad guys, even Gracie will admit just how ruthless they can be.  Still, she remains on the fringes of their court seemingly intent on laying low under the ruler’s radar.

One glance across a crowded bar.  That’s all it took for Fraze to make his way to the small, lovely woman.  His cat may not have immediately screamed Mate – but she certainly got his attention real fast.  He’d track her down and learn her secrets if it was the last thing he did.  In fact, it just might come to that.  There was no possible way that a vampire and a shifter could be mates.  Right?  He’d never heard of it but that didn’t stop his need for Gracie or his desire to keep her safe.  With no one on their side, Fraze and Gracie fought against her past, their present with little hope for a shared future.

Savage Thirst was so finely woven that the combination of vampire and shifter as mates seems likely not an impossibility.  There will be dangers to face for them both.  As well as showing Fraze’s pride that Gracie is one vampire that they could trust if they only tried.  Most were out for blood over what had been done since the vampires hit town.  So it was a battle against all odds for them to be together.  Gracie will have to give up a blood vow to the past in order to have any kind of life with Fraze.  He’s worth any risk, now they simply have to survive.

I enjoyed Savage Thirst very much.  While Fraze and Gracie were an unusual couple, the passion and devotion between them was very clear.  They had road blocks to get over but funny thing is, love usually wins if you allow it to.  I’d highly recommend this story and this entire series to any Paranormal Romance or Shifter Romance reader who loves a good romance, some danger, sexy times, a bit of a mystery and interesting secondary characters.