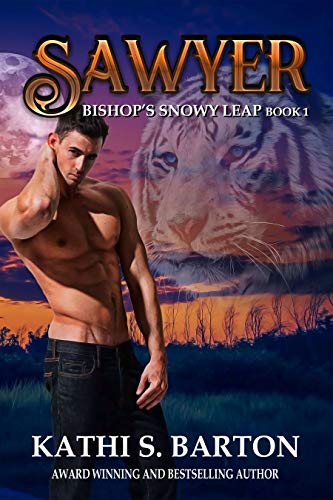 SAWYER begins Kathi S. Barton’s Bishop’s Snowy Leap series with a compelling, entertaining group of people that you’ll want to know much more about.  I know that I certainly want more of the Bishop family.  Most of what you need to know before purchasing/reading is in the Cover Description so I won’t bother with that part.  Let’s move on and get to the emotions and reactions part of this review.

There is world building – there has to be with a series that stands right now at six (6) stories to complete this one.  I didn’t find the world building overwhelming yet there are a lot of characters introduced in SAWYER.  I, quite frankly, didn’t worry about keeping them all straight as I knew Sawyer’s brothers would have their own tales told soon enough so for me they were all secondary characters who added to the story but beyond that, I’d have to wait for their stories.

Raven’s mother is a woman you are guaranteed to loathe, and if I could think of a stronger word I’d use it without hesitation.  This woman is evil incarnate, and that will become apparent quite early on and only builds throughout Raven, Sawyer and Molly’s story.

I adored Holly, Raven’s grandmother, as well as Saul and Sippy, Sawyer’s parents.  All such good people with hearts a mile deep.  As the story gets deeper we come to understand just what type of woman Holly is and I fell in love with this lady for her attitude, her heart and even her justified anger at times.  Sippy and Saul are just good people, they will give all that they have and then search for more to anyone in need.  They may be poor in possessions but they are rich beyond imagination in their attitude and their giving nature.  They’ve raised amazing sons who also have hearts of gold and would give the shirt off of their back to someone who needed it more.

Now, Molly is a little scene stealer.  An old soul in the body of a young girl, she is wise beyond her years – yet, the moments when she is just an average everyday kid were the ones that touched me the most.

Raven and Sawyer are perfect together.  She’s prone to go off the handle, he’s there to speak the words of reason and calmness.  That doesn’t mean that Sawyer won’t step in with force when needed, but in his former line of work, he knows that talking can save lives just as quickly as anger can take them.  This couple is steamy hot, and you have no doubt that they love and respect each other.

There is danger here, as well as hope, sexual tensions, friendships developing, a family falling apart and a family pulling together.  SAWYER kept me turning pages and easily got me hooked on following the rest of this series as it’s released.  This is my first Kathi S. Barton book.  There are many other series to devour and I’ve picked up the first story in a couple of series to see how they “fit” with me.  But, I may have just found another Paranormal Shifter author to follow – based on one story so far, I’d say that’s really a given.  If you love Shifter Romance then you need to check out SAWYER for yourself.