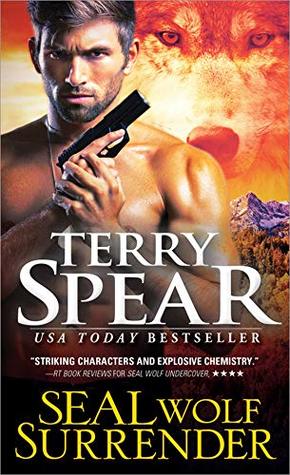 SEAL WOLF SURRENDER is action-packed with sizzling chemistry from the beginning.  Neither Natalie nor Brock were looking for mates or the happy ever after thing but their voices touched something within from that first moment.  Natalie is traveling for her best friend’s wedding and needs a bit of direction to get to her destination – enter Brock who is handed the responsibility and the phone to talk her to the pack lands.  Their beginning started long before they set eyes on each other, even if neither was looking for their mate.  Soon Natalie will find herself in dire trouble over a suitcase packed full of counterfeits and not her own clothing.  A bag mix-up at the airport is going to send this couple on a journey to find the bad guys before they can end them.

I’m not afraid to admit that I love all of Terry Spear’s shifter stories, and SEAL WOLF SURRENDER is a perfect example of why I follow her every release.  We’ll encounter a few familiar faces, put to rest some haunting moments of the past, trap the villains and watch an unexpected couple work their way to forever.  This title is a great addition to the SEAL Wolf series, and the entire overall world Ms. Spear has created.  If you love a good Shifter Romance, then have I got the book for you.

Available in paperback and the Kindle