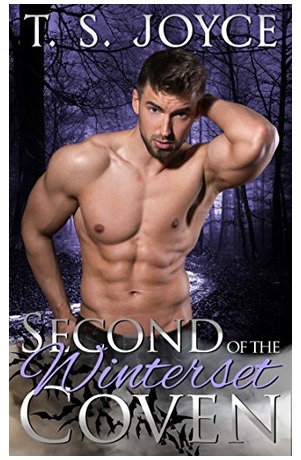 Dawn Reed is a small town girl looking for a big adventure. She’s been feeling stagnant for a while, but there is a new coven in town and the Second to the king has captured her heart. Garret has been patiently building a slow friendship, but when he cuts her off, Dawn is bereft. Not only is she losing the man she’s falling head-over-heels for, she’s losing her friends in the coven as well. But nothing is what it seems with vampires, and Garret is hiding some monstrous secrets while trying to protect her. And the closer she gets to them, and to him, the more uncertain her survival becomes.

Garret Westergaard has done this before. He’s loved hard and lost, and now the sweet human beauty, Dawn, feels like she could be his everything. Too bad he’s being haunted and hunted by ghosts from his past, because one night of unfortunate events puts her right in the middle of a brewing coven war. When keeping his distance doesn’t work, he’ll have to toe the line between man and monster to keep her safe.

Titles in this series include:  King of the Asheville Coven – Second of the Winterset Coven ( these stories connect to the series Harper’s Mountains )

While this story is about vampires, not shifters – it does take place alongside of some of the events from the Harper’s Mountains series.  And for that reason I’ve kept his review over here on Shifter Haven instead of my Haunted Bookshelf blog.  Right now there doesn’t seem to be any word on when or if any further books will be part of the Winterset Coven series.  So, I decided to wrap this up for now and bring you my thoughts on Garret and Dawn’s romance.

Garret was once a Viking warrior, proud, powerful and devoted to his clan and his love.  Everything changed the moment an evil vampire became his maker turning him into the creature he is now and destroying everything Garret loved, including the love of his life.  Throughout the long years he has been haunted by the ghost of his love, Torunn.  His devotion to his King, Aric after the epic battle that killed their crazed Queen and the battle with the Bloodrunners that had them leaving their territory, is unshakable.  In this modern age, Garret is a bit lost but functioning as best he can.  These days instead of going out among the humans for his prey, the prey lines up to come to the members of his coven as “feeders”.  Young woman who for whatever odd reason, sex, danger, or living their own vampire fantasies, seem quite willing to line up at their headquarters and offer their blood for the taking.  There is one woman among them who has become Garret’s personal “feeder”.  She’s not like the others, her reasons for being there have nothing to do with hero worship.  Dawn reminds him so strongly of his lost love, Torunn.  As Garret believes strongly in reincarnation, he believes that Dawn is his soulmate brought back to him.  Dawn and Garret have become friends, and each is attracted to the other although nothing has been acted upon.

Threats are made toward Dawn from Garret’s maker, he pushes her away and refuses to see her again.  Dawn is devastated as she is in love with the stubborn vampire.  When the threats toward Dawn become physical, she returns to the coven house under Garret’s protection.  He will not lose his soulmate again, and if it becomes a battle to the death so be it.. he isn’t afraid to kill his maker.

I enjoyed Second of the Winterset Coven.  I admit that I enjoy T.S. Joyce’s shifters more than her vampires – a personal choice.  The story is strong and convincing, the action fast and the sexy times are definitely sizzling.  One haunted man finally has his love in his arms again… how much better can you get than that?