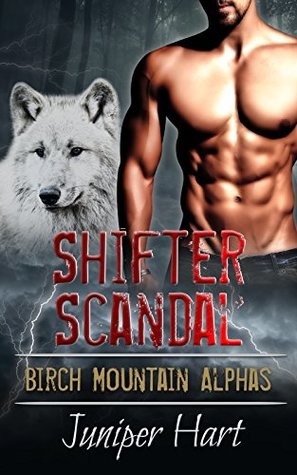 Gabriella Medina is caught up in a scandalous affair with a well-known politician that has made international headlines. She can’t go anywhere without being recognized and ridiculed as the media is unrelenting. Not knowing where to turn, she packs her bags and heads for Great Falls, Montana, where she can hide out until the media storm dies down. Soon after her arrival to the small mountain town, Gabriella is once again caught up in a dire situation from which she can’t escape. The sheriff in town isn’t making it easier, and his cold attitude makes her question his intentions.

As the sheriff of Great Falls, Cameron Lapin is used to dealing with trouble. When a beautiful young woman arrives in town and immediately starts wreaking havoc, Cameron doesn’t plan on putting up with her attitude. Yet, he can’t get his mind off her. When Gabriella is blamed for a horrific crime she didn’t commit, Cameron wants to protect her, but it could be at the risk of exposing his pack.

Can Cameron keep Gabriella safe without affecting his pack loyalty?

I will mention upfront that this is not my favorite type of shifter, I really find it difficult to connect to the more true werewolf styled hero.  And in both Ms Hart’s Shifter Scandal and Ms Davie’s Lost In The Woods we’ll find the same styled true werewolf hero.  Yet I enjoyed both stories, once I accepted a different type of shifter character.  We all have our preferences, doesn’t make one right or the other wrong just uniquely our own enjoyment factors.

In Shifter Scandal, Gabby has been falsely accused of having an affair with New York City’s mayor – in fact, he proclaimed it for every news media around.  The thing is Gabriella was out of town, she doesn’t even know the mayor, and it certainly wasn’t her in that photograph but now she’s being hounded, followed and basically run out of town in order to escape something she had no part in.  Her flight takes her to a very small town in Montana – and there her life is about to change even more.

Cameron is the leader of his pack, a pack that he intends to continue to keep beneath the radar of the townsfolk.  Even when he knows some people within his pack are ignoring his rules about hunting in town.  Now he’s got this crazy woman screaming in the center of town about an accident she claims to not have been at fault for… and even with her screeching there’s something about her that draws his attention.  Soon Gabby will be bringing even more trouble to his town, and end up putting Cameron and his pack smack in the middle of it all.

Shifter Scandal is fast paced, sexy, with an interesting story line.  I didn’t connect deeply with either of the main characters, but their story is intriguing and will keep your attention riveted to the page.  Some fast talking, a betrayal, and some shady dealings will stir this pot with deadly results.

The bonus story, Lost in the Woods by Alexis Davie was fast paced and intense.  The story of one young woman’s frightening experience with an abusive boyfriend, a man who is growing more out of control every day.  I was caught up in this story and would recommend that you continue on and experience this bonus story as well.

I’d recommend Shifter Scandal to any Paranormal Romance or Shifter Romance reader.  The story is interesting, and the characters intense.