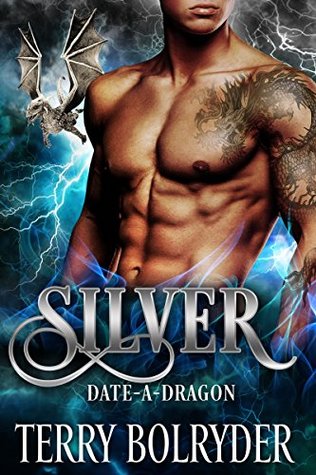 Adrien the silver dragon has everything most humans could want. But as a dragon awakened in the modern world he misses his old life, his powers (which have been temporarily restrained) and the way he used to lord his status over others. But one night when he sees someone vulnerable, someone with far less than he has ever had, he is forced to adjust his attitude and step in for someone who needs him. Someone who might just be his mate.

Kelsey has nothing. She’s been kicked down a lot in her life and always gotten back up, but a run-in with a mysterious stranger who saves her life when she is at her lowest changes everything. Now she has a job, a place to stay while getting back on her feet, and a man that looks at her with mysterious, silver eyes. Like all of the men at Date-A-Dragon, Adrien is almost unbelievably beautiful, but Kelsey has no idea the secrets that lie in store.

While Kelsey and Adrien learn to come together from different worlds, an old enemy from the past is fast approaching. Adrien and Kelsey will both face the fights of their lives if they want to claim their happy ending.

Titles in the Date-A-Dragon series include:  Gold – Silver –

From the time we were introduced to the Silver Dragon, back in the Rent-A-Dragon series, I felt it was going to take quite an unusual and unique woman to pierce Adrien’s heart.  I would say that Kelsey fits that description very well.  At the moment Kelsey is on the streets.  She’s just escaped a situation that was both appalling and dangerous.  She’ll look for work in the morning, for now she needs a warm place to sleep and that building with very little traffic looks perfect – especially since someone forgot to lock the doors.  It wasn’t breaking and entering if it was unlocked, right?  Kelsey had no idea that by entering that particular building her fate was sealed… with a silver dragon.

Adrien stumbled onto the intruder, actually almost stepped on them as he entered the hallway.  Another of the disgusting human females probably spying on them or something.  He took great pleasure in scaring the female out of the building where Date-A-Dragon has set up shop.  Yet why was he compelled to watch from the window to see where she went?  And why when it became obvious she was in dire danger did he overlook his disdain of humans and rush to her rescue?

I enjoyed Silver so much.  Part of that enjoyment comes from discovering a completely different Silver Dragon than we’ve met before.  This Adrien is nicer, more approachable – of course that’s only because he’s found his mate in Kelsey, but still it’s a nice change from the jerk he once was.  I had fun watching their romance unfold.  There are also several thread woven into this story that will lead us to the next few stories… and maybe beyond.  Time will tell on that part.  But then, I love a good mystery and it’s always a treat to try to figure out where we’re headed next.

In Silver you’ll find a lovely, strong and determined heroine, one sexy dragon with his own ideas about humans, danger, mystery sexy times and a story to capture your attention.  I would definitely recommend this story and this series to any Paranormal Romance or Shifter Romance reader.  It’s a fun adventure.