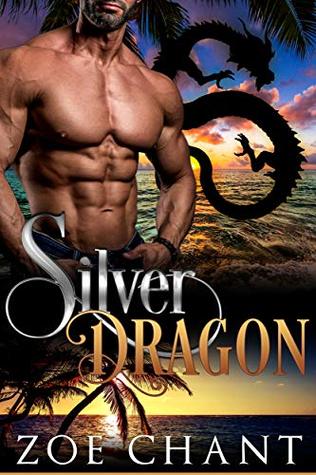 SILVER DRAGON has all the earmarks of the beginning story in a series, we even know that one of the most charming secondary characters ever, Joey the nine-tailed fox will have his story told in SILVER FOX in the near future — so like many stories from Zoe Chant what first appears as a single title may one day have an official series title… I certainly hope so for this one is fascinating in so many beautiful ways.

I loved Bird’s friends, a group of women writers in their, what is considered by many, older years often meet to help stage and photograph the eldest’s (at a spry 82) covers for her mystery novels.  On this day they are on the beach about to commit murder most foul when surprisingly a man steps in to save the “murder victim”.  Quickly realizing his mistake, Mikhail must come up with some fast talking explanations as to how he simply seemed to appear on this deserted beach to come to an imaginary rescue.  And although he certainly cannot simply say he was in his dragon from flying overhead when he saw a crime he does come up with a sidestepping reason… all the while fully aware that the victim he saved is his mate.  A mate that at his advanced years, even for a Dragon Knight, he never thought he’d ever experience the joy and privilege of finding.

Bird is a wonderful character, and I fell for her from the very start.  She is a victim of a manipulative, entitled piece of garbage who isn’t worthy of cleaning dog crap off of her shoes… yet this human monster has stripped Bird of everything that is of emotional value, and some physical value, in her life.  He’s ruined and stolen her career as a children’s books author and illustrator, he’s broken her spirit having her believe she is worthless, and in the divorce proceedings he managed to get control of their children and systematically worked his evil until she was separated from them for 27 years, only recently being reunited by her children’s efforts.  Bartholomew is a piece of excrement and I actually did a fist-pump when Bird finally was strong enough through Mikhail’s love and support to put her ex firmly in his place.

I’m going to rein myself in because my thoughts on SILVER DRAGON and the amazing characters within could go on for quite a while.  There are certainly mystical evil bad guys to fight, and the groundwork for the continuation of a series is firmly in place… but this time it was the love between two older, perhaps world-weary characters that captured my heart and my attention.  There is no magical age when love no longer exists, whether that means emotional or physical… love happens when it’s supposed to and to put a time limit on that is simply cruel I have always thought.  Mikhail and Bird prove that love can come along at any age, and it’s just as wonderful – if not more appreciated for having to wait so long.

No matter your own age, pick up SILVER DRAGON to discover a love story that will warm your heart, bring you tears of sadness and happiness, make you smile and laugh out loud, cheer a bit, enjoy some steamy moments and simply fall in love.  I had a blast and would recommend this one for any Romance reader.  Now I need Joey’s story that handsome SILVER FOX.