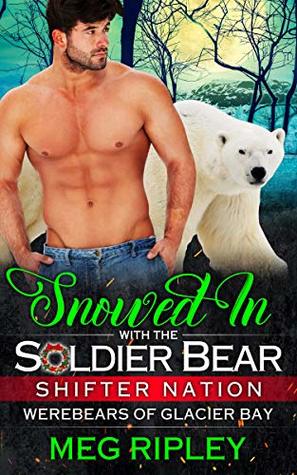 Weeks before Christmas, strong-willed Vanessa heads out into the Alaskan wilderness for one reason alone: to hunt down her long-awaited trophy, a moose. But the elusive beast has other plans, knocking the huntress out cold after she tries to claim her prize. All hope for Vanessa’s survival seems lost—until she wakes up in a hunky, rugged stranger’s cabin.

Quinton has moved south to join the Glacier Bay bear clan, desperate to escape the pain of his losses. After having to bury his wife and daughter when returning home from war, the polar bear shifter decided he couldn’t afford to love again. By coming to Glacier Bay, he’d hoped to find a new support system. But what he didn’t expect was to find a lifeless beauty in the snow outside his new home.

He plans to drive her into town the next morning, but a blizzard has trapped the pair in the cabin, and another storm is on the way. Will finding each other make this the Christmas of new dreams come true?

Titles in the Shifter Nation: Werebears of Glacier Bay include:  Alpha’s Secret Baby – Mated to my Brother’s Best Friend – Snowed In with the Soldier Bear –

I kept being drawn back to this title, even though I’ve yet to read the two earlier stories in this Shifter Nation: Werebears of Glacier Bay series… oh, I’ve read some of the other Shifter Nation books… but Snowed In with the Soldier Bear just convinced me to get off my duff and add these series onto my 2019 reading schedule.  So many, many books and never enough time.

I’ll confess I wasn’t certain how I was going to deal with Vanessa.  She’s a hunter, both trophy and survival, and I’m not good about holding back my opinion of trophy hunters.  Enough said, right?  So, while I’ll admit it did take me a bit to warm up to Vanessa, in the end she is the perfect mate for  Quinton in so many ways.  I’ll let you discover those ways yourself by recommending that you pick up Snowed In with the Soldier Bear.

I love a Point of View that lets me get into the heads of both main characters.  Quinton is easy to fall for, his pain can be felt through the pages.  Being able to “hear” his thoughts as well made enjoying his discovery of another chance at love so much more poignant and endearing.  Vanessa is so very good with Quinton, and her reaction to his polar bear is classic for her personality.  They sizzle their way into a reader’s heart.  If you love a good Shifter Romance with realistic acting characters then you’d enjoy Snowed In with the Soldier Bear.