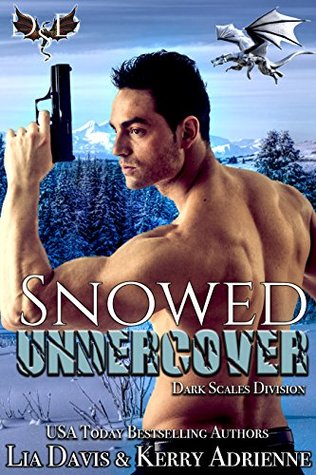 “When the auroras sparkle green and pink, the monster will return…”

Agent Luke Snow knows all too well what it’s like to lose a mate. His last case ended the search and siege—aka death—of his mate’s killer. The hole in his soul remains. When his DSD team lead, Owen, sends Snow on a vacation, he escapes to his remote Alaskan home. After being gone so long, his cabin isn’t as relaxing as it should be. Nightmares and a monstrous ice dragon haunt his nights while a dark-haired human beauty torments his days.

Mackenzie Wilde didn’t think twice when her father asked her to move back to Fairbanks and take over his clinic. Life in the big city isn’t as fulfilling as helping those truly in need. Plus, moving to Alaska will bring her closer to her father and her mother’s people, the Inuit.

When the devilishly handsome Luke Snow shows up at the clinic with a wounded teen, she’s intensely drawn to him. His alpha male personality is exactly what she doesn’t want in a man. But Snow may be the only one to turn to when the nightmares become reality.

Snowed Undercover is an intense, fast paced Shifter Romance with a second chance at finding a mate… and one very evil, vindictive dragon to bring down.

Luke is back in Alaska at his home on the outskirts of a small village recovering from his last assignment – basically told to take a vacation to regroup.  He is still mourning the death of the woman who was his mate, they hadn’t actually gone beyond the bonding but he knew Jo was his mate without a doubt… until she was killed by a rogue, evil, crazy ice dragon.  It doesn’t take long into his forced vacation to find himself rescuing a teenager and meeting a woman that his dragon calls mate – how can he possibly have another mate, especially when he hasn’t gone beyond Jo’s death.  He can try to ignore his dragon’s call but soon Mac is getting through his defenses.  When a young woman is kidnapped by the ice dragon Luke will do everything in his power to find her… without letting Mac know what he really is.

I enjoyed Snowed Undercover yet I have to admit I found Mac not so easy to care about as a mate for Luke.  I cannot tell you why, and that is frustrating to me because they should fit… I simply couldn’t connect with Mac, I found her actions and reasoning enough “off” that I found myself being more in Luke’s corner.  That is not to say that this isn’t a compelling, involved, interesting and really good story, it is definitely all of that – I simply wasn’t charmed by the heroine.  We get a chance to meet up with almost the entire team once again.  And the battle with the evil dragon is involved and riveting.  Secondary characters always make the book for me, and I’m definitely looking forward to more stories in this series to get to know the other dragons.  If you love a good dragon romance with one nasty piece of work evil dragon to contend with then you’ll enjoy Snowed Undercover.