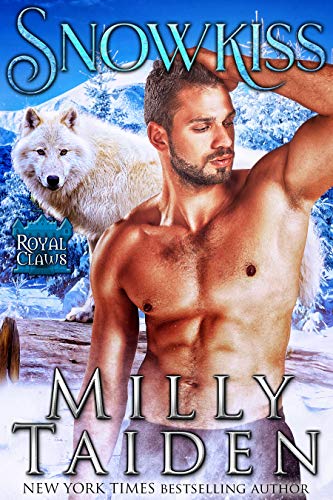 Natalie Barsotti is on a mission. She wants to prove the existence of shifters in a small community. Getting a job as a nurse in Winterland, Alaska, is only the first part of her plan. If only a certain mayor wasn’t so irresistible and so damn grumpy, it would make her operation so much easier.

Tucker Kearney is a simple wolf shifter. All he wants is to watch over his community of Winterland and stop the disappearances happening all around Alaska. The last thing he wants is a mate. He has reasons for keeping Natalie at arm’s length. Even if she is his mate. Even if he desperately wants her.

No matter how hard they try, Natalie and Tucker can’t seem to stay away from each other. But there are more dangerous things than the past lurking in the wildlands. It might destroy them before they even begin…

Titles in the Royal Claws series include — Snowkiss – Frostbite – Icescape

Snowkiss begins the Royal Claws series with a granddaughter’s quest to learn the truth of her grandmother’s ramblings before her death from complications of Alzheimer’s disease.  Nana swore she saw shifters, men who could change into animal forms (wolves for her)… but was this simply a mind trick by a horrible disease that steals loved ones away long before their physical bodies give out, or could it possibly be true?  Natalie is determined to find out.  And if it involves a little bit of subterfuge, skimming the lines of truth then so be it.  She simply has to know for certain.

And one of the co-mayors of the tiny, remote Alaskan town of Winterland who might have needed a medical professional for the town but also is hoping that the nurse he hired might be the mate for one of the other two men who also govern their town.  For himself, Tucker knows he’ll always be alone, he’s been told that his entire life, and through unwarranted guilt, he believes it as truly as he knows he is a wolf shifter.  Stubborn man.

But Tucker is in for one huge surprise, an unwelcomed surprise when he discovers that Natalie is indeed his mate.  How is he supposed to deny himself this lovely lady and keep a rein in on Sawyer and Colin, let alone discover who is behind the disappearances of people and shifters in the area surrounding Winterland?  No, Natalie cannot be for him… until he discovers that he is powerless to resist a spunky, sexy, equally stubborn human.

Snowkiss is sizzling sexy, full of dangerous undercurrents, funny as we watch one stubborn man give in to what everyone around him already knows, and intriguing as we slowly uncover what or who might be behind the disappearances that are plaguing Winterland.  I had fun with this story which sets up the next story in a way that will have me waiting for the release date of Frostbite (May 28, 2021).  If you love a story with two stubborn lovers, a bit of danger, engaging secondary characters you’ll want to learn more about, and definitely sexy sizzle… then Snowkiss and The Royal Claws series would be perfect for you.