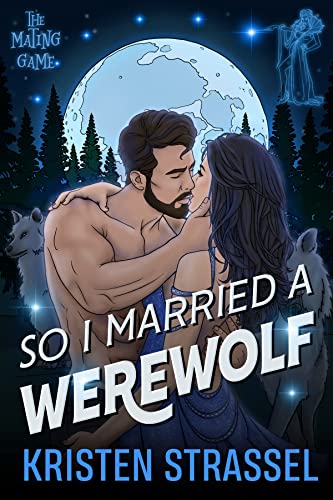 I married a wolf for “the good of the pack.” Ask me how that worked out. Now I’m a rejected mate with three kids, and a wolf in sequins and fierce heels is on my doorstep, promising she can breathe life into the dreams that died that day… if I’m willing to put my fate in her well-manicured claws.

Why did my ex tuck tail and leave me with a giant mess? What is he trying to prove by coming back? And am I brave enough to defy my pack and choose myself?

Oh, enough about him already. He had his chance. I’m ready for a new life.

Bibi le Bonnet is my fairy dragmother. The fabulous wolf will give me a total life makeover and the mating ceremony of my dreams… All I have to do is become a contestant on The Mating Game and choose a mate sight unseen after asking a few flirty questions in front of a live audience.

After a shocking twist on stage, my chosen wolf is revealed as none other than superstar Logan Mathis. I’ve spent so many nights fantasizing about the famous actor, and now he’s on The Mating Game wooing the biggest homebody mom ever: me. Can I trust this wolf when he says he’s willing to claim me or is it all an act to revive his career?

And three dates to find my forever mate.

Every date with Logan is time in the spotlight. I want to believe the fantasy, but am I fooling myself? Because my ex is back, and he’ll drag my pack into open war before he lets any other wolf have me.

So I Married A Werewolf kicks off The Mating Game series with a romance that has everything that I enjoy in a Paranormal/Shifter Romance.  And if you’ve read The Real Werewives series, you’ll want to go on this next adventure with Bibi le Bonnet!  While the cover description tells you everything you want to know before picking up Logan and Cindy’s story what it doesn’t tell you is what a whirlwind romance you’re about to dive into that’s full of laughter and tears, danger and betrayal, sizzling chemistry, and a couple you can’t help but root for to find their forever mate in each other.

I adored Cindy.  She’s a mom of three whose worthless jerk of a husband has run away from his responsibilities after losing a challenge against the pack’s Alpha.  Pedro doesn’t know how to do anything but be a royal, entitled pain to everyone he encounters.  He might have slinked into the forest where he can plan his mischief, and pull strings unseen – but he’s left the woman who married him, even though they were not mates for the good of the pack and his three small children to face the displeasure of their pack alone.  What a jerk, a dangerous, deranged jerk.

Cindy is convinced that she’s going to face the rest of her life without her fated mate.  She has children to raise, a small pack town that basically has turned their back on her because of Pedro’s actions… and the last thing she saw herself as was an attractive woman who deserves happiness.  Bibi le Bonnet changed that when Cindy was picked to launch the new The Mating Game reality show and Bibi is about to change her world.

Logan is a famous actor who is facing some career challenges.  He’s infamous as the lead actor in a program where he turns into his wolf in front of the cameras… but lately, his wolf has been absent, and Logan is facing not only personal troubles but career ones as well.  His manager signed him up for The Mating Game, Logan believes he’s working from a script and that couldn’t be further from the truth.  His wolf stirs when approaching the set where Cindy is waiting behind a dividing wall… and Logan is about to learn that wolf or not he’ll fight to keep Cindy, his fated mate at his side.

With cameras filming, danger approaching, kids being, well, kids Cindy and Logan are about to fall hard for each other.  I loved that Logan opened up to Cindy about what was going on with his wolf.  It’s impossible to start a real future with secrets between them.  Cindy simply blossoms in So I Married A Werewolf.  It was a delightfully fun journey to watch her come into her own, and face down an ex, her packmates, and even her own insecurities to have the future she and her kids deserve with Logan.  We’ll get a few hints about who the show’s next couple will be, spend some time with the fierce, fashionable Bibi (who I loved almost as much as the main characters), and watch a pack begin a rebirth because of the actions of others.  Begin – they aren’t perfect yet but they’re at least trying now.

I had fun in this world, and I cannot wait to get my hands on So I Won A Werelion.

*I received an e-ARC of this novel from the author via Booksprout. The opinions expressed in this review are my own – good, bad, or indifferent. I was not financially compensated for this review and no expectation of a positive review was promised.*

Available for your e-reader