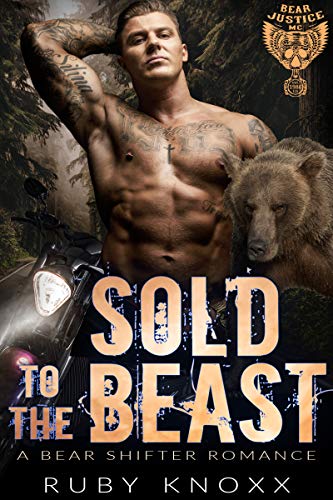 Ruby Knoxx is a new-to-me author and if this first book of hers that I just finished is any indication, well, then I’ll be reading more of her titles.  I’m tempted to dive in for a binge read of the releases in the ‘Bear Justice MC‘ right now – but reality rears its ugly head and I realize that I have too many other review obligations to indulge myself like that.  But I’ll be working my way through this series rather quickly for I already definitely want to know what comes next for the members of this MC.

The action leaps off the page from the very start of ‘Sold to the Beast‘ as we experience Liv’s terror, anger, fear, and desperation at what’s happened to her – and at the hands of someone she should have been able to trust.  Liv is a wolf shifter, and she’s been sold to a pharmaceutical company for experimentation… by her pack, by her brother.  It doesn’t get much more terrifying than that… until it does.

Arlo is a member of the Bear Justice Motorcycle Club.  A group/clan of bear shifter bikers who ride that narrow ribbon of space between vigilante and justice.  He’s checking out a new case when the unexpected is revealed – an old enemy of his and the club has resurfaced and Arlo is in this job for the takedown, the money is beside the point.  He never could have expected to find his mate at this facility or what he’d do to keep her safe.

‘Sold to the Beast‘ is full of action, intrigue, sizzling sexy chemistry, and a clan full of unique personalities.  I was easily caught up in this world, yes there is a bit of worldbuilding but that’s to be expected in the first story of a series.  Arlo and Liv worked well as a couple.  The unease, the suspicions, the holding back on Liv’s part made perfect sense for what she’s gone through.  Trust doesn’t always come easy, even when there is a ‘feeling’ about someone that you want to act on.  There is the almost instant recognization of mates – yet, not completely accepted because both have their reasons for being cautious around and about other people for both have been used for the wrong reasons.  I’d not call this insta-love, insta-lust sure, but the love takes just a smidge longer to acknowledge for them both.  In any event, I enjoyed myself in this world and will definitely be following the series to the ending.  I had fun, and that’s the whole point.