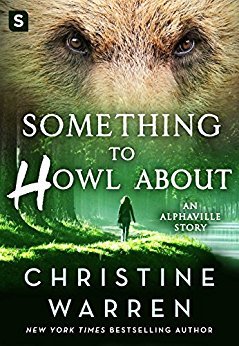 Banished from her pack years ago, Annie’s lone wolf wandering has brought her to Alpha, Washington, home to all shifters who don’t quite fit in in the “normal” shifter word. Now Annie has the chance to go back home…if only she can make good on a favor her alpha owes the mayor of “Alphaville.” But it’s not much of a favor when you’re helping the hottest shifter in town…

Grizzly shifter Jonas Browning has a clan in trouble. They haven’t had a child born in over a hundred years…and their clan faces going completely extinct. Genetic scientist Anne Cryer has been sent to help save them. But what Jonas doesn’t count on is being irresistibly drawn to the small wolf shifter, and his bear isn’t about to let her go…

Titles in the Alphaville series include:  Something to Howl About – Baby, I’m Howling For You –

I love the beginning of new series, especially Shifter series which has become my favorite genre to relax with.  Every author adds something new to the Shifter lore, and that keeps the genre fresh and enjoyable for me.  Something to Howl About is a short introductory story that introduces us to the small town of Alpha – otherwise known as Alphaville where Shifters live freely, a sanctuary for many with physical wounds, family troubles or simply don’t fit in anywhere else.

A safe haven, something that Annie is in dire need of, even if she’s avoided Alphaville because of its reputation of being the last hope place for many Shifters.  She’s been banished from her wolf pack in New York over a stupid mistake, but a lone wolf isn’t the life for her and she’s never been able to settle down anywhere always holding out hope of returning home.  She’s been offered a tease from her former Alpha, the one who banished her.  Do this one little favor for a friend in Alpha and I’ll consider allowing you to come home.  It’s a carrot on a stick that Annie cannot resist, so with the thought of returning home utmost in her mind she made the trip to Alpha, never imagining what was waiting for her there.

I enjoy many things about series that keep me coming back – believable characters and situations (for the genre) is pretty high up there.  But when an author’s characters can make me laugh out loud then I’m hooked for life with that author.  It’s odd perhaps, but make me feel, make me laugh and I’m in reader heaven.  Which is what captured me about Something to Howl About.  Jonas made me laugh – and the best part, his character didn’t mean to for he was perfectly serious spouting off his “reasoning”.  But when his mother did something that I’ve imagined doing to countless clueless characters over the years… smacked him upside his head… I knew this was going to be a series I’d follow to the end.  Just that simple.

I liked Annie and Jonas.  I want to know more about the residents and visitors to Alphaville.  This introduction novella sets up the series in a way that makes me want more – and if you love Paranormal Romance or Shifter Romance, I’m thinking you’ll feel the same way, too.  Check it out, I think you’ll have a new series to follow when you come to the final page.

This review originally appeared on my Keeper Bookshelf blog.