Posted May 11, 2017 by Marsha in Shifter Connected, Shifter Series / 0 Comments 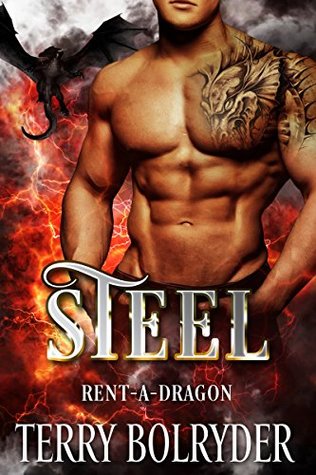 A dragon as a handyman? Ridiculous.

At least Liam Steel thinks so. Sure, he and his crew of newly-awakened metal dragons are experts at building things, but after being sunk at the bottom of a frozen ocean, all they want is to find the mates they were sailing in search of in the first place, and Liam isn’t sure how that can happen while he’s playing in the dirt. Until he meets his first client, a sweet, curvy, no-nonsense business-woman busy taking care of everyone but herself. His heart screams ‘mate’, and he’s ready to get his hands on more than her yard.

Kate Hinton doesn’t know what to make of the beefcake Rent-A-Dragon sent over to help with her yard. Impossibly tall with soulful teal eyes, dark hair, and the features of a male model, she’s pretty sure he should be walking a runway rather than digging trenches in her yard. And the way he looks at her? Like nothing else matters in the world. But the more she gets to know her kind, friendly, amazingly efficient handyman, the more she is realizing he’s not from her world.

He lives in a remodeled castle. He doesn’t know certain modern words. And he definitely doesn’t understand the rules of modern courtship. But somehow, Kate is finding herself falling in love with this ‘dragon’ all the same, and finding out there is a whole other world outside her own. One full of secrets, and danger, and maybe even the love of a lifetime.

I had such fun with Steel.  The story is charming with a touch of danger, the dragons are of course sexy as sin and a bit clueless as to modern day women and the villains are bad but not as bad as the mysterious person is.  Overall, this is going to be a fun ride into this new series.

Liam and his crew are metal dragons, ancient beings who left their land by ship in order to search out their mates.  Their ship sank, burying them in an icy tomb.  Through the Awakened Dragons, these dragons have been rescued and placed under the guidance of three members of the Awakened Dragons.  The men are still looking for their mates – and ending up in brawls more often than not.  A plan has to be put into place to ease them into the modern day human world a bit more efficiently.  Since all the men are skilled in building and fixing things the Rent-A-Dragon handyman service was born.

Kate is their first client.  Human, overworked with a yard that needs some serious help.  Liam is assigned to her and the sparks begin to fly at their first touch.  While Liam realizes she is his mate, Kate has no clue that dragons even exist let alone that she’s destined to be with one.  Sure the guy is hot but she’s been down that road before and no man is ever going to convince her that she’s beautiful or that he won’t stop working once the “I love yous” start being said.  Yeah, Kate’s been burned before.  Liam is determined to win his lady, and he will not give up on convincing his mate that they belong together.  Circumstances are about to make everything a bit more complicated.

I enjoyed Steel very much.  It’s full of banter, danger, sexy times, mystery and more of the unique dragons we’ve come to expect from Terry Bolryder.  Even though this series is a spin-off, there is a bit of world building in this first story but that is easily done through conversation and the introduction of characters.  While we do meet some, let’s call them rivals of the dragons, there is also a mysterious person who made an appearance and was never explained away.  I’m thinking there’s more to learn about that.

I would recommend this story and this series to any Paranormal Romance or Shifter Romance reader.  Fun characters, a bit of mystery, some danger and a couple that you’ll enjoy.  Now it’s time to move on to the next story in this series.