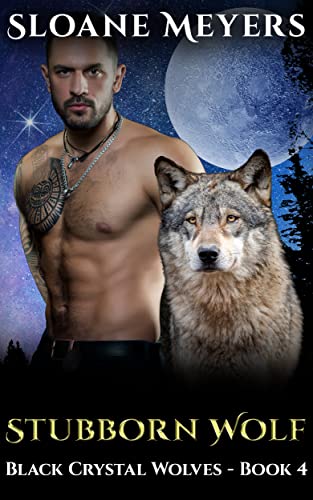 This angry wolf is blazing his own trail.

Van Jennings is the latest wolf shifter forced to leave the corrupt Black Crystal Clan, but he’s not going quietly into the night. He joins the resistance in the nearby town of Ashfield, determined to fight against the evil alpha ruining his beloved clan. He’ll stop at nothing in his quest for revenge.

Then, fate throws him a wild card.

When full human Brittany Arnold walks into Van’s life, her beauty takes his breath away, and her spirited personality makes him think she could be a good ally in his fight for his clan. But Brittany doesn’t see him as an ally. She thinks he’s wild and dangerous, and maybe she’s not wrong.

You can’t tame a wolf, after all.

The two of them clash and sparks fly, but not the good kind. Van and Brittany seemed destined to be enemies until Brittany needs someone to save her. Van steps up, and suddenly, his wild, dangerous side doesn’t seem like a bad thing. Suddenly, Van understands why fate brought Brittany across his path. He needs her strength and spunk to get him through the tough days ahead. He needs her soft body next to his to keep him warm through the dark nights.

But is the gulf between them too wide? Can they put aside their differences and make room for love?

Stubborn Wolf is the fourth title in the Black Crystal Wolf Shifters series, and brings together two, yes, stubborn people, one with a lot of attitude and misconceptions about strangers.  Especially tattoo shop owners!

Things have reached a new level of tensions and danger in the Black Crystal wolf pack’s home territory with an Alpha who is out of control in his need for his every word to be obeyed or need to be provided for without question.  And many of those needs involve harming members of their community for any imagined slight against the Alpha.  When Van steps in to help another shop owner who is being “taught a lesson” by the Alpha’s thugs he also finds himself on the wrong side of a man who holds all the power.  It’s time to leave, to join his friends in the small human town just beyond the forest.  An unwanted move, but a necessary one if he wants to keep his life.

Brittany owns a small tea shop in town and is outraged to learn that a new tattoo shop is opening up across the street.  She’s not shy about trying to cause trouble for Van attempting to make starting his business difficult, simply because of her preconceived ideas.  They’ll have some heated arguments but Brittany will have to face the consequences of her actions eventually… and it won’t be pretty.

I enjoyed Stubborn Wolf, and while I have not yet read the earlier books I was not the least bit lost in understanding the dynamics of Van, his friends, and their mates, or the troubles with the Black Crystal Alpha.  I will admit to not falling in love with Brittany, I loved Van and enjoyed the brother-like teasing among his friends but Brittany’s actions and attitude stayed with me throughout their story – yes, even when she apologized.  Things are about to get interesting for the wolf pack so I’m definitely looking forward to the next story (and getting caught up on what I’ve missed).  I had a fun time here, and if you love shifters, lifemates, danger, and sizzling chemistry then you’d also enjoy Stubborn Wolf.