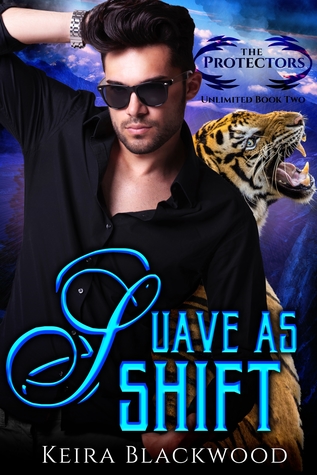 Manliest of man-meat, star of your dirtiest fantasies, I’m the guy that gets the job done—with style. What job? Any job. All the jobs.

I fight monsters for a living because it takes one to defeat one. But I’m not just any supe, I’m the most bada** tiger shifter that ever lived. And I won’t let you forget it.

Boss says I’m one mistake from demotion. I say it’s just another day as a real-life action superstar. Nothing can change that, and no one can match my awesomeness.

Lincoln is… well, Lincoln for there really is no other word to describe this tiger shifter.  Full of himself, yes,  Self-confident to the nth degree, yes.  And about to fall tail over claws for a human, yes.  The romance, the sass, the mystery and the mates finding each other is just some of what you can look forward to in Suave as Shift.

I adored Juliana.  She’s sassy, takes no crap from anyone, especially Lincoln…. yet there are times when her vulnerability, her scared side shows through.  It’s when she owns up to a mistake, usually after careful thought, that I liked her the best, not everyone real or fictional can do that.  And, of course, she and Lincoln sets sparks off from their very first meeting.  Lincoln, the traveling man, the never settle down man took just a short time to truly listen to what his tiger was telling him.  Juliana is their mate, but she’s also human so Lincoln must tread softly in what he can share immediately.

In Suave as Shift you’ll find many Paranormal creatures, and some that might be new to you.  Small town antics and hatreds run riot as well.  I enjoyed myself very much in this world, as always.  The rest I’ll leave up to you to discover on your own.  I had a blast, I’m always amazed at Ms Blackwood’s imagination and so glad she lets us in to her worlds.

I read this title through my Kindle Unlimited