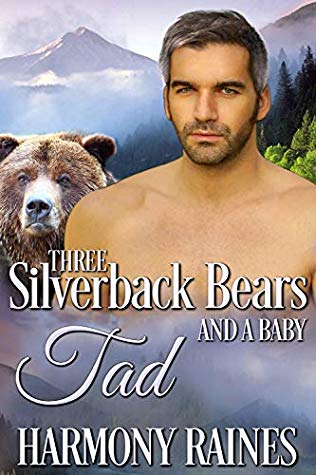 Now, that is a very long and detailed Cover Description.  So, in reality, this review is going to be very short because – look up there –  <grin>.

Tad is the creative brother, the sculptor who doesn’t mind being on his own in his work of creating beautiful, emotional sculptures.  But being alone without finding his mate yet, well, that a different feeling.  But he’s having fun being one of baby Milly’s three daddies, enjoying seeing his brother Max and Josephine so very happy together – and a bit worried about how Jake is handling all of these changes.

His future is about to step into his workroom and change his life forever.  Heather has a lot on her plate with getting the Craft Barn up and running, moving to Bear Creek and leaving the jerk of her ex-husband in the dust.  The last thing she wanted to be was asking a favor of a famous local sculptor with the opening of the Craft Barn.  She’s not sure what hit her but she does know that her attraction to this handsome man was too fast for her comfort.  Yet that’s not going to stop her from finding out all she can about Tad because just maybe her future isn’t as alone as she thought it would be.

TAD is an easy, laid-back story with one ex-husband being a selfish jerk as the most drama.  I had fun with Heather and Tad, enjoyed the secondary characters — and I’m anxiously waiting for Jake’s mate to show, she’s got to be something special for this lonely bear.